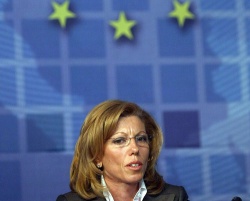 Rumiana Ruseva Jeleva was born on April 18, 1969, in the town of Nova Zagora, Southeast Bulgaria.

In 1988, Jeleva graduated from the German Language High School in the city of Burgas. In 1994, she earned a Master's degree in social pedagogy from Sofia University "St. Kliment of Ohrid".

In 1995, Jeleva completed a second Master's degree in sociology at the same university. In 2003, Jeleva earned her Ph. D. in sociology from the Otto-von-Guericke University in Germany. She has additional specializations in social sciences and economic sociology at other German universities.

In 2005, Jeleva became a Scientific Associate, I-st Grade, Ph. D. in Sociology at the Sociology Institute at the Bulgarian Academy of Sciences, Section "Sociology of Labor and Social Policy". Since 2007, she has been a visiting professor of European Studies at the University of Magdeburg, Germany.

Jeleva has managed and has participated in various research and social projects including UNDP and PHARE program projects. She has attended numerous international conferences and seminars on sociology and social issues presenting papers.

In May 2009, Jeleva was placed as No. 1 on the GERB party European Parliament ticket.