Bulgaria Energy Tycoon Hristo Kovachki: Both Stanishev and Borisov Are No Good 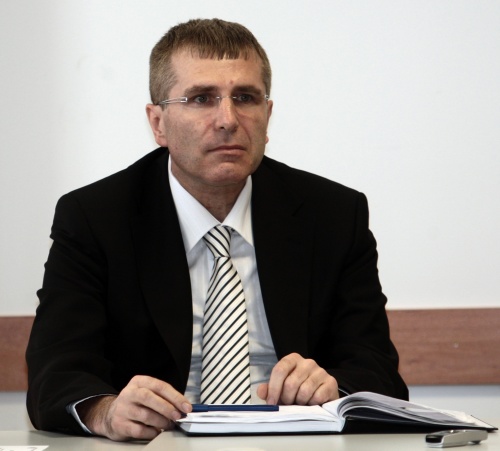 According to the 2008 ranking of the Polish magazine Wprost, Hristo Kovachki is the second richest Bulgarian. Photo by BGNES

Interview with the Bulgarian tycoon and informal leader of the centrist and liberal LIDER party, Hristo Kovachki, at the founding of the Bulgarian Industrial Chamber in Sofia, Friday, May 22, 2009.

What was the motivation, the reasoning behind the founding of the LIDER party?

Would the existence of the LIDER party be possible without Hristo Kovachki?

I think that the LIDER party has its own way. The fact that I am trying to help it out in one way or another as a person who has a certain influence in society, and I am kind-of trying to increase LIDER's influence - this only means that I can to a certain extent speed up or delay the respective process.

But LIDER has its own way, there are people who really want to commit to it, and they see their way as part of it. I have sensed that, I have seen that, I have specific people come to me, and say, "We want to be part of the future of this party; if we've wanted any other party, we would've picked by now".

And the fact that if, say, some Bulgarian businessman wants to invest into a neighboring state, that actually increases Bulgaria's influence in the neighboring state through economic leverage. And I see nothing wrong with that.

LIDER is also raising the question about the formulation of a new development model for Bulgaria because of the end of its post-communist transition. Is the so called transition over already, and what should this model be like?

It should be more social, a welfare model that helps our society to develop better, and to conduct better welfare state policies. And Bulgaria can have better welfare and social policies only when it has better economic policies because without a strong economy, without taxes there's no way one can have welfare policies.

Who do you think would be more capable of leading Bulgaria after the elections - outgoing Prime Minister and BSP leader, Sergey Stanishev, or current Sofia Mayor and GERB leader, Boyko Borisov?

In my view, both Sergey Stanishev, and Boyko Borisov have a lot of shortcomings. I believe that new persons must appear on the political stage. Both Stanishev and Borisov have demonstrated that they have issues with administration, governance, etc.

So which political parties are your potential and most likely partners? Or, should I ask instead - which ones aren't?

We are holding talks with practically all political forces in the center-right spectrum. I think we have a better understanding with them, and very good relations. We are firmly determined to fight for one Member of the European Parliament seat, and I think this is what the result of the 2009 European Elections will be for us.

You have entered into a coalition with the "New Time" ("Novoto Vreme") party whose leader Emil Koshlukov is the top candidate on you European Elections ballot. Who is benefiting more from this coalition - LIDER or the "New Time" party?

I think that both parties are benefiting together. At the end of the day, union makes strength. We formed this union with the only aim to become stronger.

I can't talk about the others, I can talk about myself only. My work day from dawn till evening is filled with work, various projects. I have no yacht, no plane, no luxury houses.

So - if that's what an "oligarch" means in Bulgaria - for me this is a person who exerts all their efforts to work, to preserve jobs, to develop an industry; for me this is hardworking person.

The media often call you "the Bulgarian Khodorkovsky. In this context, do you think that legal procedures and investigations against you might be politically motivated? Do you think your involvement with the LIDER party might have anything to do with that?

I am not asking myself this question. I am just waiting for the investigation to be over, and that is all, i.e. I don't care. At the end of the day, I believe in the Bulgarian justice system, and I think it will reveal what the truth really is.

Have the Bulgarian elites composed of persons like yourself reached the point where they really throw their weight behind Bulgaria's national interests?

Well, if this point hasn't been reached, it will be soon. There are already a lot of people who would like to help develop "Bulgarianness" (i.e. "Bulgarian national spirit" - interviewer's note) - in all of its forms - in the economy, in culture, in politics. So the more people like us unite around this idea, the greater influence we will have, and the more of our ideas we are going to realize.

What is your motivation to create the Bulgarian Industrial Chamber (BIC)? Don't the existing business organization already serve adequately the same purposes?

I personally haven't seen so far any help from any business or economic organization, which in some way lobbies in favor of business development. And I am probably a member of all of those existing organizations in Bulgaria.

What exactly needs to be changed in this respect?

The members of those associations really need to comprehend that their task, their job is to help preserve and develop Bulgarian business. We are currently in an unparalleled crisis. What have those organizations done? They just stay calm, keep quiet. There are no specific actions.

In my view, they have lost their flexibility, activeness, they are in a dormancy of a sort, and we want to wake them up. Let there be more discussion of this issue, let those people really go out and defend the interests of the business.

Has there been any initiative organized by them so far? Have they managed to gather 1 000-2 000 businessmen who can say, "We don't like that, we want higher subsidies in agriculture; we want energy production from our own resources; we don't want to import natural gas but to produce energy from coal, and nuclear plants, etc."

I don't see all that, I don't see any of those associations take a specific stand on any specific economic project.

Our readers are largely foreigners who are interested in Bulgaria such as diplomats, businessmen, investors, as well as Bulgarians living abroad. What is the most important thing they should know about the LIDER party, Hristo Kovachki, BIC?

I would like to tell them that the objective that we have set for ourselves is to help Bulgarians live better in Bulgaria. I invite more people to come from abroad and to aid us in this goal.