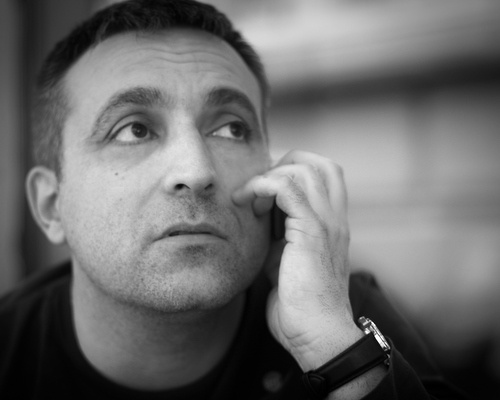 Interview with Robert Yanakiev, Sofia City Councilor from Mayor Borisov's GERB party and former GERB party speaker, and Director of the Vazrazhdane Theater in Sofia since 2005.

How did the latest Sofia garbage crisis affect the campaigns for the elections? Who was the winner, and who was the loser from it - the Bulgarian Socialist Party controlling the government, or GERB party of Mayor Borisov?

Keeping in mind the persons who are in the government, their intention has been absolutely obvious from the very beginning. As early as Mayor Borisov's first partial mandate (2005-2007), it was clear that the government of the Socialist Party and DPS1 would do anything to create difficulties for the Mayor.

The fact they are doing anything possible to hinder his work shows clearly their immense fear of him. Their only chance against him is to interfere with his activities as much as possible. I never imagined anyone could make such a fool of oneself by using even people's trash for political purposes.

Why do you say that the governing coalition is afraid of Boyko Borisov, the Sofia Mayor and GERB party leader?

Because he has appeared as a new figure. Even I was tempted by his personality to enter politics, and I had had many offers to do that in the last twenty years but had never done it before he appeared. When this person appeared on the political stage, I finally started to believe that we can break free from slavery and manipulation. This is the kind of guy who can motivate people.

I do understand those currently in power in Bulgaria. If your grandparents and parents rode around in Chaikas2, and if you spent your childhood playing in Boyana3, it is pretty clear that you wouldn't want to lose this status.

If the government is made up of normal people, if Boyko Borisov becomes the Prime Minister, the major issues could be resolved thousands of times, including the problem with Sofia's garbage disposal. But if the key positions are dominated by the persons who are faithful to communism, there is no way this would happen.

And the really striking thing about the Bulgarian Socialist Party is that it is a party with a history of more than 100 years which is being manipulated by the schemes of another party, DPS of Ahmed Dogan.

I have to tell you, in 1989, 20 years ago, when the changes began, I thought that in five or six years Bulgaria would become like Switzerland. This has not happened but if we follow the lead of Boyko Borisov, things can really improve, finally.

Is this really why Borisov and his party GERB are aspiring to power?

To tell you the truth, no one really would want to be in power now, with the present economic crisis which will take years to be overcome, but there is no other option.

Because we are quite different from Socialist Prime Minister Stanishev, who, as it was recently revealed in the VIP Brother 3 TV show, used to play with Todor Slavkov4 as a kid, and right behind his red tie, he could see the floor of a party and state leader.

Stanishev did not grow up, as I did, in the Zapadna Fabrika Quarter, in Sofia, between two Roma ghettos.

Then, in 2007, after Bulgaria's first European Parliament elections, GERB won the greatest number of votes but Stanishev and Dogan that their people would have their elections night press conferences first, and together with Mayor Borisov we all stormed out of the building.

But the fact of the matter is that Boyko Borisov is just a pretext, a catalyst for GERB to come into being, Borisov is just a bearer of the idea and the action, for the setting up a normal political structure. Borisov is not a sun, he has never had claims for everything. He has never tried to school anyone; it is us, the party members, who want more from him.

What he said after GERB's founding was, "You have heads on your shoulders, I already did the most important part of my job". Luckily, we also have many other talented people like our Chair, Tzvetanov.

But I have never seen a more dedicated person than Borisov, I assure you. He is under an enormous pressure, every day, every moment, he is traveling all over Bulgaria. One has to be way above the average level to do all that.

Practically all public opinion polls show that GERB will win the greatest number of votes but would likely have to go for a post-elections coalition. Who are your options and most likely partners?

Well, a coalition means a compromise. And we in GERB are making personal commitments, so we want all or nothing. Still, a coalition is possible only with the right. There is no way we would form a governing coalition with the BSP.

And I have to tell you, if 70%-80% of the eligible Bulgarian voters do cast their votes, I am not saying who they should vote for, I am just saying they should vote, then all of Dogan's buses to bring over Bulgarian Turks from Turkey for the elections would be useless. If I can help achieve this one thing in politics, I don't want to achieve anything else.

I am an open-minded person. I have Roma neighbors, I served with ethnic Turks in the army back in the days, and work with ethnic Turkish people. Don't get me wrong, this is not about racist sentiments, this is about certain persons. I just can't not make peace with the fact that Ahmed Dogan is being presented as a national hero. I don't believe him, and I don't believe the Socialist Party.

Because they clearly lie to all of us, I am actually going to sue them because they are flooding all of us with ads in which they lie to us. The simplest example is when BSP says, "We doubled the retirement pensions, and the average wage", as if they were alone in the government, and they have no coalition partners. So this is as if I do something together with two other people, and then I claim it was me who did it.

Is a right-wing governing coalition of two strong leaders like Borisov and the Blue Coalition of former Prime Minister Ivan Kostov at all possible?

I think it is absolutely possible, this would a clear unification of the right wing. Whatever people may say about Ivan Kostov5, he was the only Bulgarian leader who managed to put Ahmed Dogan where he belongs - isolated, and out of power.

He fixed the country after in 1997 a crazy government of the then BSP Chair and PM Jean Videnov6 brought Bulgaria to a collapse. Back then I thought this was the end of the world. But it is actually worse now with all the crimes and corruption because there are much greater and larger-scale cover-ups. Ivan Kostov is like an institution on his own. Who is Kostov's match within the Socialist Party? No one.

Despite the present crisis in the Union of Democratic Forces (the party whose leader Kostov was before he split off to found his current party Democrats for Strong Bulgaria), there are still all those Bulgarians who always have been "blue" throughout the 1990s. We hope we would be able to attract exactly them.

Unlike the governing Socialists and DPS we don't have the money to flood them with ads and billboards, but we are constantly meeting with these people, we gather them in towns and cities across the country. We don't pay singers like Azis7, we sing ourselves if we have to, just to mobilize the support of these people.

If Kostov's Blue Coalition doesn't make it to the next Parliament, can you form a governing coalition with the far-right Ataka party, and/or the Order, Law, Justice party of Yane Yanev, which claims to be a conservative formation?

I don't think a coalition with Ataka is possible, I don't think this is an option, and I don't think I can trust Ataka. Ataka's leader Volen Siderov tried to make a career in politics in all sorts of parties and finally made a breakthrough after rounding up his family, and they staged an "Attack"8! What sort of an attack are talking about here?! What is this nonsense! If you look and listen carefully, Siderov is slandering everyone except for Russia and the Russians, which is suspicious.

The same goes for Yanev's party. It is a very similar case. I have no idea where Yanev gets all of his inside information, and what sort of connections he has.

Yet, I need to point out, that despite all that, I would still rather have a conversation with these guys than with the well-dressed businessmen from BSP. You know, we all started from scratch in 1989 but they stole the money from the state-owned enterprises, and set up companies like insurance corporations. I, on the other hand, only managed to set up a theater college for young people and kids, that's how much I managed to do...

What are GERB's actions likely to be if there is a new BSP-DPS government?

This is not an option for me. This would be the end of Bulgaria. If Boyko Borisov does not become Prime Minister, I don't want to even think about that.

Actually, we will have no society, no civil society. if one does not go to theater, and does not bring there their spouse, or kids, or even their lovers. It's the same with voting. If you don't vote, there is no way you can be critical of politics and politicians after that. It's like a new movie. It might turn out to be a bad movie that you can criticize but you have to watch it first.

How does GERB plan to cope with corruption, organized crime? Is that really possible if the judicial systems remains unchanged?

The only way out of the present debacle is introducing and applying iron rules. Mayor Borisov has already done this in the Sofia Administration by firing so many people if there were any indications they had been involved in murky deals.

What would you say to all those foreign citizens who are curious about GERB? What is the major thing that differentiates GERB from everyone else?

GERB does not offer anything brand new. We just want to bring back Bulgarians' faith in their European life, and well-being, in their European standard of living. The Bulgarian people are talented, and we will build upon that. But we also vow to introduce rules and make them obeyed.