Teodor Dechev: Vote Buying in Bulgaria or Shop till You Drop 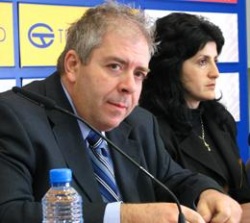 Interview with Teodor Dechev, Deputy Chairman of the Union for Private Economic Enterprise (UPEE). The UPEE, a Bulgarian business organization recently announced an award of up to BGN 10 000 for any information and evidence for vote buying in Bulgaria.

Q: When does vote buying date back to in Bulgaria? What are the new developments in this year's elections?

Vote buying is part of the political life of all countries with democratic election procedures. Yet there is one crucial difference. In most countries, which are stable democracies, as well as in Bulgaria during the first years after the collapse of the communist regime, the target of these activities were the so-called marginal groups, mainly poor and socially excluded people. These are people, who consider their vote to have no worth. For them, the money they receive is more important than the choice they can make by casting a ballot as their conscience tells them.

The unscrupulous and rampant vote buying in Bulgaria started prior to the local elections in 2005. The scale of the vote buying depends on how important the vote is, that is the more majority-leaning an electoral system is, the more unbridled the vote shopping becomes. Up to 2005 vote buying in Bulgaria was resorted to in a bid to round up election results. The impact of this practice was almost negligible given the high election turnout of more than 50%. The local elections in 2005 were a totally different story. Mayors of towns, villages and municipalities are elected according to a majority electoral system, where every single vote is extremely important. That was the fist time that politicians started to pay huge sums.

Vote buying is part of the election corruption, which has many expressions, including the splurging of lots of money for media coverage. The time came, however, when the people who forked out the money decided to start investing in something with much more tangible and quick results, namely the direct buying of votes. The main target groups were socially excluded people, the Roma minority, disadvantaged people. Ever since the elections in 2003 and 2007 and the establishment of the so called regional business parties, there flourished a whole array of undemocratic and illegal practices.

New factors came into the equation prior to this summer's elections and raised a number of concerns. There are many indications and tip-offs of vote buying on an epidemic scale. Vote buying in many cases is an example of money laundry. This is a way to avoid the need for issuing documents involved in all other money transfers, for example when you pay for an advertisement in a newspaper. The money that is too dirty to get rid of through money laundry is transmuted into political clout.

I am absolutely sure that a whopping amount of money has been spent for buying votes this year. I can't cite any figures, this is something that my colleagues from Transparency International will do.

Q: Has the trade in votes in Bulgaria turned into a well structured business practice?

We can easily calculate the amount of the investment made by multiplying the number of the controlled votes per BGN 100, the average price paid per vote. The final recipient receives no more than BGN 30. This is a very well structured system with a number of units, including brokers, dealers, etc.

The new thing this year, which is particularly unnerving is, that there are a number of brokers who shop votes for more than one party. They don't care about party colors, they care only about the money that they will get. To top it all off, the dealers are very often people with criminal records.

We have also signals about mayors, who have been elected on the ticket of one party, but shop votes for another party. This practice is not only illegal, but also totally immoral.

I can cite a concrete example in the municipality of Brusartsi, Northwestern Bulgaria. We have notified the Bulgarian State Agency for National Security (DANS), the Interior Ministry and the prosecutor's office. It is still to be seen what the final result will be.

There are Bulgarian parties, which claim that they don't buy votes, they are just "convincing" the people employed by the person behind the party. This can hardly be the case since Bulgarians are people who don't particularly like their employers. It is highly probable that there is more to it than mere talk - pressure and threats that the employed may lose their jobs.

Q: How are these practices spread throughout the country?

A: I would like to cite Miroslav Sevlievski (member of Novoto vreme party, who runs with Lider party, backed by the controversial tycoon Hristo Kovachki), who commented that the votes the party received in the European Parliament elections were "equally distributed". Our surveys show that the electoral corruption practices are equally distributed throughout the country. There are no regions immune to controlling or buying votes.

Q: What is the antidote?

A: The cure for this disease is very simple - high turnout. Estimates show that the controlled votes accounted for about 15% of all votes cast in the European Parliamentary elections. The damage that buying votes does will be cushioned quickly should election turnout increase by at least 20%. The situation is made worse by the majority electoral system, which was approved by the lawmakers this year. There is one word to describe the impact that this system has - gerrymandering, a form of redistribution in which electoral district or constituency boundaries are deliberately modified for electoral advantage. The big cities are very much undervalued, while the smaller villages and towns are very much overvalued.

Vote buying and selling is a crime, but when a party undermines the democratic foundations of the country, this is called treason. This happens at a time, when Bulgaria has gained the infamous popularity of the most corrupt country in Europe and there is talk of triggering a safeguard clause. The high turnout is a simple cure for the disease. Unfortunately the people do not seem to care. We live in times when people do not seem to care about things that other people have given their lives for. There are six million eligible voters in Bulgaria, who can easily neutralize the bought votes if they just go out and cast a ballot.

Q: What is the profile of the person who sells his or her vote?

There are two types of people who sell their votes. These can be socially excluded people, who are not motivated to do anything, who are poor or from a minority group. The other group of people are those who have a good job, incomes and education, but are so cynical about Bulgaria's political life that they are more than ready to sell their vote.

Q: The Union for Private Economic Enterprise (UPEE) announced financial prizes for those who alert about vote buying. What was the response of the people to this initiative?

A: We received more than 200 signals only for the European Parliament elections. Yet people are very scared and in most of the cases they speak only on condition of anonymity. We are not sure whether we will be able to confer our top prize of BGN 10,000 since nobody wants the publicity it will involve. My expectations are that the vote buying tensions will escalate in the last week before the general elections on July 5.