Do You Speak Bulgarian? 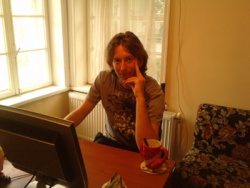 Many European countries including the UK and the Netherlands have introduced formal linguistic requirements and language tests for the purposes of migration and citizenship. After the recent general elections chaos maybe it is time to introduce them to Bulgaria too.

The Bulgarian media has recently focused on Southern areas of Bulgaria where especially the older generations do not speak, read or understand the language of the country, instead being wholly reliant on the use of Turkish.

This problem was again bought to the attention of the general public after Sunday's Bulgarian general elections, after which conservative RZS party leader Yane Yanev stated that it was absolutely impossible for the polling stations in Turkey to have dealt with 1600 people each, especially as "70% of the voters there could not even read or speak, understand or read Bulgarian."

It is of course impossible to back-date such tests to include the Bulgaria-born migrants to Turkey who left the country during the so-called "revival process" at the end of the 80s, when ethnic Turks were forced to adopt Bulgarian names, prompting their mass exodus. However, the introduction of language tests now may stop problems in the future.

Test fairness would obviously be a particularly important quality when tests are related to migration, residency or citizenship.Unfair tests may result in migrants being denied civil or human rights. Having said that successful systems used currently all over the world do show that fair tests are possible.

Australian citizenship legislation states 'an intending citizen must possess a basic knowledge of the English language.' Applicants must be able to answer questions in simple English concerning personal particulars, such as; ‘How long have you lived in Australia? What are your children's names?. The thinking behind the tests is that it is important that people have a level of English which allows them to participate in the society through education and employment.

There are also some examples of using them as instruments of objectionable social policy; a dictation test was used following Australian Federation in 1901 to implement a ‘White Australia Policy'. In the US literacy requirements were used against English-speaking Irish immigrants in the mid-19th century, African-Americans in the Southern states following emancipation and European immigrants around the time of the First World War.

Despite the possible negatives of testing, Bulgaria could benefit hugely if it chooses to bring in stronger citizenship policies. This is not a call for extremism; it is an attempt to keep Bulgaria from being controlled by outside forces that kept the country from developing properly for 500 years.