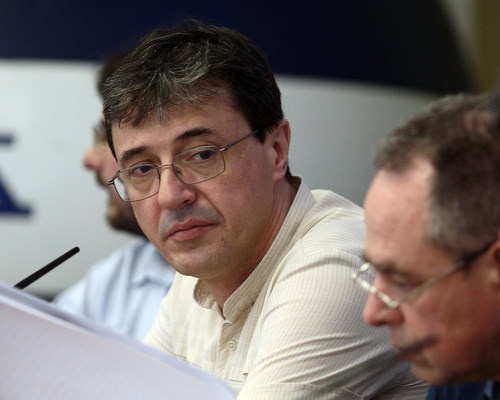 What factors, in your view, led to the surprisingly - if that is the right word - high voter turnout at Bulgaria's 2009 Parliamentary Elections?

There are several factors, In the first place, this was the high stake at the elections, i.e. the forming of a working and acceptable government. A number of voters voted exactly in order to enable the forming of a government as well as to avoid the risk of early elections in the fall which seemed very likely.

The second factor is the intensification of the elections campaign, especially of the topics related to the ethnic Turkish Movement for Rights and Freedoms (DPS). This mobilized additional voters, including both voters favoring and opposing the DPS.

Third, there was the desire for a change especially as far as coping with corruption is concerned - the three-way coalition government did not manage to cope with corruption. Fourth, the voters were also possibly mobilized in order to decrease the effect of the so called "controlled vote", i.e. to minimize the effect of vote buying.

I believe these were the major factors that served to mobilize in one way or another different categories of voters. After the European Parliament Elections, the expectations were that about 3,6 million people would vote; in fact, some 4,2 million Bulgarians voted, i.e. 600 000 more voters went to the polls. They were probably mobilized in the last couple of weeks before the elections. However, there is no one single reason for that.

What were the factors that contributed to GERB's election victory, which turned out to be more decisive than expected? Was that a vote of confidence for GERB and Boyko Borisov, or a vote against the BSP and the three-way coalition?

GERB's first place was expected by everyone. I took the trouble of summarizing ten public opinion polls performed by six sociological agencies after the European Elections on June 7. The average expectations were for about 1,2 million voters for GERB. Their actual number was almost 1,7 million which means that almost the whole mobilization of "unexpected" voters was in favor of GERB. The causes of that could be various.

I don't think that this was predominantly a "disapproval vote"; rather, it was an "approval vote". Those "mobilized" voters probably decided to support the emerging winner because they were afraid of long and hard negotiations for the new government, and of the likelihood of early elections in the fall.

If you had decided to "punish" the three-way coalition, you would hardly have done that in the last moment. But if you had decided not to vote, you could change your mind in the last moment because you don't want instability and new elections in the fall. This is exactly the "approval vote" - when you think it is better to give a chance to the emerging winner. Thus, GERB received a huge vote of confidence but at the last moment it also received additional credit of trust in order to be able to prevent instability.

As far as the "disapproval vote" is concerned it did not affect in the same way all the parties from the three-way coalition. The NMSP lost the most since it did not even manage to mobilize all of its voters from the EU Elections. The BSP received more votes than it did on June 7 but it actually registered its worst performance in Parliamentary Elections since 1990. The Socialists somehow went back to their electoral popularity from 1997-2001.

What does the emerging cooperation between GERB and the Blue Coalition look like? What are the possible formulas for that, in your opinion? How stable can be a government of GERB and Blue Coalition?

GERB is in a position in which it can dictate the situation. It could form a ruling majority with the Blue Coalition or with RZS ("Order, Law, Justice"), and both parties have already stated they would support GERB in the Parliament. I think that Boyko Borisov is trying to protect GERB from becoming a hostage of its coalition partner.

I don't think that the Blue Coalition or RZS would expect too much in terms of ministerial seats, or that at least at first they are going to support GERB whatever formula GERB chooses. Because neither of them is interested in early elections with unpredictable results. Not to mention that "Ataka"also said that it would rather support GERB.

As far as the stability is concerned, we currently have no grounds to forecast anything else but it is certain that there will be differences between GERB and the Blue Coalition.

What sort of government of Bulgaria do you think that our partners from the EU, NATO, USA, the foreign investors, etc. could expect from GERB and potentially the Blue Coalition?

The most important expectations are for a stable and responsible government that obeys Bulgaria's international commitments. But also for a government that will be capable of cracking down on corruption in a considerable way. The expectations regarding GERB are enormous, and that is why every single of its steps are going to be watched closely. Paradoxically, the foreign criticism towards GERB's activities is not going to subside, to the contrary - it is going to increase.

What do you think the Bulgarian citizens expect from GERB and Boyko Borisov, first and foremost? Do you think that GERB and Borisov have the capabilities and resources to meet these expectations?

I do not believe that these elections are seen by most Bulgarian citizens as dramatic and fateful. We are no longer in the situation that we were in 1990, 1997, or even 2001. There are certainly going to be changes, there will be new figures in the ruling elite, new social strata will represented in the Parliament; but there will also be familiar faces. The expectations are, first and foremost, for stability and honesty - these expectations go for every new government.

The paradox is that after 1990 Bulgaria has never re-elected any Prime Minister. In this respect, some say the voting in Bulgaria is always negative, "retaliatory". I do not share this generalizing conviction, I think that the voters act logically more often, they react adequately to the situation.

GERB has the ambition to meet the expectations even though it is a very young party with still insufficient governance capacity (I am talking just in terms of quantity - about the need to have at least 2 500 experts for the executive branch).

The question, however, refers not just to GERB. I think that the civil society needs to be active, to apply constant pressure. An opposition also needs to be formed because the worst thing is when a government practically has no strong opposition.

There are also specific expectations for GERB with respect to the effects of the financial crisis but also, most of all, in the field of public services and welfare issues: retirement pensions, health care, education, unemployment. This will be a huge challenge for the new government, and I really hope that it will not apply the neoliberalist formulas which are already familiar but are becoming more and more rejected.

How would you forecast the development of the DPS and its leader, Ahmed Dogan, from now on in Bulgarian politics, given that the leader himself seems to have started to "play" the "ethnic card", even though he accuses the others of that? And this is in a situation in which the DPS will no longer be in power, but received substantial increase in the number of votes it got.

We could talk a lot about how the DPS was buying votes, or controlled the vote in the small municipalities that they govern and have a strong influence on. But we should not shut our eyes for the fact that a number of Bulgarian Turks and Muslims supported the DPS because of their fears.

Not because a new "Revival Process" (i.e. the campaign of the Bulgarian communist regime in the late 1980s to assimilate the ethnic Turks and Bulgarian Muslims) is possible but because the anti-DPS rhetoric has clearly turned into an anti-Turkish rhetoric. This is very bad because it causes an erosion within the society, stimulates vile sentiments, and creates a negative image of Bulgaria around the world.

The DPS is not going to sink in a crisis, at least not any time soon. Even though it will remain in opposition. The DPS has positions in the local authorities, plus it is a very well organized and centralized party. It is going to continue to represent a considerable part of the Bulgarian Turks and Bulgarian Muslims but it is also going to continue to open up for other ethnicities. The DPS is hardly going to radicalize unless, of course, the extreme nationalists become dramatically active.

Although the DPS could be criticized in many aspects especially regarding its patronage and corporatist practices, its positive role for the political representation of a considerable part of the contemporary Bulgarian society is beyond doubt.

However, one of the main effects of the recent election campaign is that in the short run, the DPS is not going to have a close political ally. But this is hardly going to last very long.