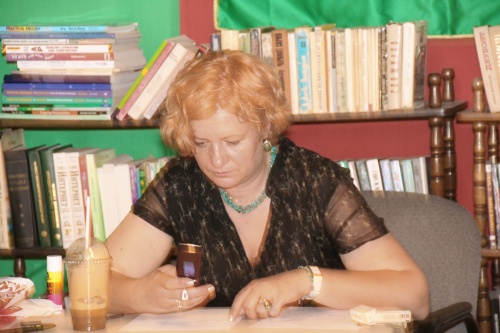 Interview with Valeria Gospodinov, a Bulgarian living in US, the pillar of the Bulgarian community in Philadelphia, and main organizer of the local polling section for the July 5 general elections for Bulgarian Parliament.

A year earlier she was filmed by the "Other Bulgaria" TV show helping Bulgarian newcomers to get accustomed to their life in America.

For eight years now, along with organizing the Bulgarian community in Philadelphia and tending two Bulgarian/European grocery stores, Valeria is also the Head Rowing Coach at Haverford College in Philadelphia.

Valeria, please first tell us about yourself. Who is Valeria Gospodinov?

Hi. Thank you so much for asking me for this interview. I was born in the Danube city of Ruse. I am 43 years old. I am a former rowing competitor, I practiced rowing since youth and for 8 years was a member of the Bulgarian National Rowing Team. I graduated from the National Sports Academy in Sofia and then obtained a second degree in sports journalism. After that I began working in the sports department of the Bulgarian TV Channel TV7. In Bulgaria I was also a member of the Media Commission at the Bulgarian Olympic Committee.

I live with my family in Philadelphia since 2000. My husband Slaven Gospodinov is a former volleyball player and competitor. Our 14-year-old daughter Siana is actively practicing volleyball here. Our son Daniel is 5 and is the only family member to be born in the USA.

Upon arrival in the US we were met and helped by the Bulgarian Olympic, World and European wrestling Champion Valentin Iordanov. He is such an extraordinary and noble person and helped me so much that it made me wanting to help other Bulgarians myself.

In the first years of our life here we realized we missed Bulgarian food a great deal and the idea was born to open a Bulgarian grocery store. (But we sell food items from all over Europe.) We now have two such stores called Euro Market.

What brought you the United States?

In 1995 I won a US green card through the lottery, but my husband and I made the decision to stay in Bulgaria because we believed changes were coming and we would be much better off in our own country. After the theft of two cars and 6-7 robberies of our apartment, our patience was over. We played the lottery again and the miracle happened - my husband won a green card. So, we played the lottery just twice and won both times. Talk about a clear sign that one must leave for the USA.

Many Bulgarians living in Philadelphia say you are extremely involved with the Bulgarian community, and you put lots of effort into many activities. What exactly do you do?

Unfortunately there isn't a Bulgarian Church in the Philadelphia area, which is usually the place where a community abroad gathers. I was watching how other emigrant communities support each other and felt sad that we Bulgarians did not have a place where to get together.

Before we opened our first store I tried to meet in person all Bulgarians, who had won a green card and to help them become oriented in the new situation, rent a home, furnish it, obtain a social security number, enroll their children in school, find work, take English classes, obtain a driver's license and so on. For me this was a way to spend more time with Bulgarians. Despite going to work I always found time for them.

After we opened the first store my husband Slavi and I began organizing parties for March 3 and May 24 and other Bulgarian holidays. We have a large room under the store whose walls and ceiling I covered with the Bulgarian flag (this was much cheaper than hiring professional painters and decorators and it ended up being pretty impressive) We used to invite Father Marko from Harrisburg the capital of Pennsylvania, our state). Regretfully, he retired and there isn't currently a Bulgarian priest, who lives nearby, but we continue to mark almost all Bulgarian holidays.

So a sort of Bulgarian Club was born where we not only gather together, but on May 24, 2007 we managed to open a Bulgarian library. At the moment we have 320 books and gladly accept any book donations.

I am also a licensed notary in the state of Pennsylvania and certify documents with apostil for all Bulgarians who need it. This way they do not have to travel for letters of attorney to the Consulate in New York or the Embassy in Washington DC. We also offer money transfers to Bulgaria at the store.

Maybe the more important question is - why do you do all this?

Because I love everything Bulgarian. I live thousands of kilometers away from my motherland but it does not mean I do not love my country. Just the circumstances forced us to seek a better place to live.

You were the key factor to open a polling section in Philadelphia. Is this the first time such section was opened in the area? How did the organization go?

Regarding the polling section - there was the need for someone to collect all the voting applications, so I took it upon myself. Many Bulgarians come to the store to buy groceries and it seemed this was the best way to ask them to sign the petition. It was not easy because we ran against a tight deadline.

Four years ago I also organized elections, they took place in downtown Philadelphia. We needed to rent a room because we did not have our own place. Luckily we secured the help of the President Judge Emeritus of the Superior Court of Pennsylvania Stephen J. McEwen, JR, who is also the Honorary Consul for the Republic of Bulgaria This was the first time ever (2005) when Bulgarian elections were held in Philly (this is our city's nickname), but the voter turnout was much lower than the one on July 5.

The organization of the vote ran perfectly because of the wonderful Bulgarian community. We had to create a voting booth, find a ballot box, arrange the room. We also printed a poster announcing in Bulgarian and English that this was the Philadelphia polling section. We were able to receive on loan from Judge McEwen two 4-meter-tall Bulgarian and American flags that we placed near the sections entrance. We had to work hard, but I think the efforts paid off.

Did anyone help you? Did other Bulgarians get involved?

Bulgarian media published numerous reports that many obstacles were created for the opening of polling sections in the USA and across Western Europe while over 90 000 managed to vote in neighboring Turkey. Were there indeed obstacles to open the section in Philadelphia?

No, there weren't. The only difficulty was the tight deadline while here distances are much greater and people work a lot, so time was running against us. The employees at the Consular Office in New York City were very nice. The General Consul, Mr. Nikolay Milkov, contacted us many times to explain in detail the requirements and to ask us if we needed anything.

Bulgarians in the USA like voters in Bulgaria were much more mobilized this time. What do you think are the reasons for the record voter turnout was registered in the USA?

I think Bulgarians got tired of waiting for something good to happen in their motherland. I would even say they got scared this country, our Bulgaria, was going to get destroyed. Believe me patriotism is deeply hidden inside every Bulgarian, every Bulgarian has it, for some it is just a matter of waking it up.

Bulgarians in the USA overwhelmingly cast their ballots for the opposition. GERB is convincingly leading in the polls followed by the Blue Coalition but only in New York City and Philadelphia the "Blues" are ahead of GERB. What do you think the explanation for that is?

In those areas you indicate (New York and Philadelphia) I think there are many people from the older emigration, they remember the Union of Democratic Forces, while in Atlantic City there are younger Bulgarians, there are many college students there as well.

Don't forget Bulgarians abroad are the people who have been chased away from their motherland for one reason or another. Many smart, educated Bulgarians leave and make a career abroad, not that they do not want to work in their own country, they do, but they compare life in Bulgaria and outside it and realize they can spend their in a better way. There are many old expats who fled the Communists regime while their relatives in Bulgaria were victimized, their property confiscated.... I can tell you so many stories about all this.

How did Election Day go? What was the mood? Do you already have official information about voter turnout? How did people vote?

Election Day went smoothly, without any violations. Everyone was happy and satisfied to be able to express their opinion. There was a line, but everyone waited patiently their turn. People came from somewhat distant places and met other Bulgarians, phone and contact information were exchanged. Many stayed until we completed the ballot count and announced the results. There was great excitement and great joy over the results' announcement. The exact poll data can be found at: www.euromarketphiladelphia.com.

Just a day before the elections the most likely new Prime Minister of Bulgaria, Boyko Borisov, vowed to work to introduce as quickly a possible legislation banning dual citizenship. This idea has a significant support in Bulgaria exactly because of the Turkish vote. How do you think Bulgarians in the USA would react to such legislation?

I personally watched an interview with him and he said he would change the Election Act so that people with dual citizenship are banned from voting, I did not know about banning dual citizenship all together, but - 7 000 votes came from the USA and 90 000 from Turkey. If they take away our Bulgarian citizenship it will hurt a lot, but if they just take away out voting rights, the above numbers demonstrate we will gladly get over it.

And at the end I wish to congratulate Boyko Borisov with the victory! I hope he manages to make all Bulgarians all over the world willingly come back to their country to live and work. Thank you.