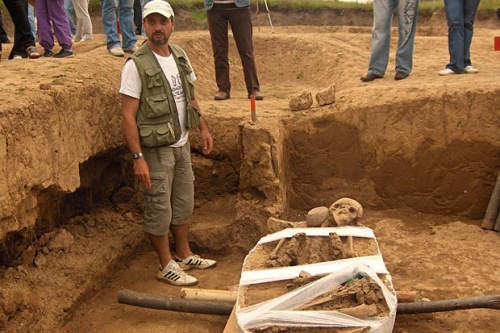 Bulgarian archaeologist Georgi Ganetsovski together with "Hristo", the 8000-skeleton before its transfer to the Vratsa Museum. Photo by Darik Radio

The 8000-year-old skeleton of a young man found near the village of Ohoden has been taken to the Regional History Museum in Vratsa.

The skeleton, already dubbed by the Bulgarian media as “the first European”, was discovered recently by archaeologist Georgi Ganetsovski who specializes in paleolithic settlements. It belonged to a 35-year-old man with a height of 165 cm.

This is the fourth 800-year-old skeleton found in the Valoga region near Ohoden, and the first one belonging to a man.

“We are uncovering a so far unknown prehistoric culture in Northwest Bulgaria which corresponds to the settlements in today's Serbia along the Morava River. One of the aims of our studies is to test the theory about the so called “Danube Road” of the spreading of the first settlements with economic production,” archaeologist Ganetsovski said.

He has studied the site near Ohoden since 2004 when he discovered the skeleton of a woman that was named Todorka, and which can be seen in the museum in Vratsa.

The latest skeleton has been given the Bulgarian name Hristo. It was transferred fully preserved to the museum using a special technology, and is yet to be studied through DNA and other tests.

“We already have found four individuals here, and we will have to sacrifice one tooth from each of them for the DNA tests. I do feel concerned because by excavating these graves, I am disturbing their resting in peace,” Ganetsovski declared. His current expedition will last till the end of July.