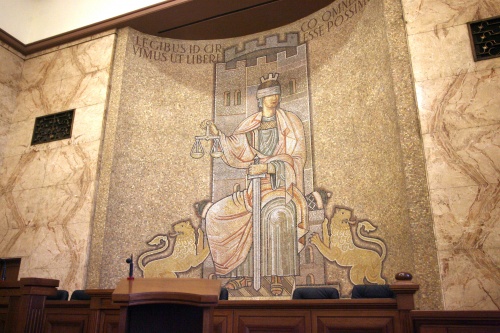 Bulgaria's Supreme Judicial Court is shaken by a corrution scandal involving violations of the ethical code of magistrates. File Photo

The member of Bulgaria’s Supreme Judicial Council, (VSS), Ivan Dimov, retracted Thursday his week-old decision to resign from his post.

Dimov said a week ago that he will submit his resignation over his proven connection with the man known as “Krasio from Pleven.” The latter is an individual who, allegedly, offered magistrates to secure their appointment to high ranking positions through the vote of the VSS in exchange for EUR 200 000 in cash.

Dimov is one of the three VSS members, whose names were announced by Chief Prosecutor, Boris Velchev, as people, who had Krasio's phone number on their phone logs.

In an open letter, issued Thursday, Dimov says that his name and professional honor have been subjected to an absurd and baseless discrimination over a few private phone calls and explains it was “suggested” to him that he should resign.

The committee in charge of probing the case reached the conclusion that two of the three magistrates have hurt the prestige of the judicial power and have violated ethical rules, something that requires their dismissal from high-ranking magistrates’ posts. The probe found that Stoiko Stoev, whose resignation was accepted by VSS, had 212 phone calls with Krasio, Ivan Dimov – 33.

Regarding the third VSS member, Plamen Stoilov, the committee decided that he did not violate any ethical rules. Stoilov, who is said to have had only one 5-seconds-long phone call with Krasio, threatened Thursday to sue everyone who continues to mention his name in connection with the scandal.

Krasio has been identified as Krasimir Georgiev, 27, from the northern city of Pleven, where he has a share in the disco bar “Anaconda,” a girlfriend, who is pop folk singer, and is described as a “dark skinned man wearing many gold chains and using luxury cars and a driver.”

A month ago, Georgiev was charged with perjury over telling interrogators he never knew any magistrates.

The President of the Supreme Administrative Court, Konstantin Penchev, defined Thursday the VSS situation as a precedent and appealed to all magistrates that know they have had contacts with Krasio to submit their resignations.

Chief Prosecutor, Boris Velchev, on his part, asked VSS to halt all new appointments and hires until the scandal is over due to the current lack of trust in the VSS. Velchev explained he would present the Council with data about three groups of magistrates proven to have been communicating with Krasio – those who have been appointed to high-ranking posts in the judicial system, those who applied for such posts, but have not been selected, and a third group he called “others.”

Velchev pointed out he was still waiting for full logs from mobile operators, but said what has been found out until now is embarrassing enough with magistrates from all over the country having contacts with Krasio without any logical explanation for them.

The original idea to put a moratorium on the appointments belongs to Penchev and he backed-up Velchev in his proposal.

It was also revealed recently that Krasimir Georgiev worked in 2005 for the election campaign of the party of former Tsar, Simeon Saxe-Coburg, National Movement for Stability and Prosperity, (NMSP), in the city of Pleven.