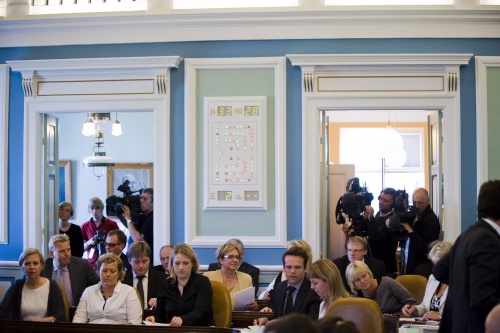 Members of Iceland's parliament, Althingi, vote in favor of the government's resolution on talks with the European Union (EU) in Reykjavik, Iceland, on 16 July 2009.

The Parliament of Iceland approved Thursday the government proposal for applying to become a member of the European Union.

The cabinet's motion was approved with 33 votes in favor, 28 votes against, and 2 abstentions. Public support in Iceland for applying to join the EU has been low but has started to rise since the country was hit particularly hard by global financial crisis in October 2008.

The major obstacle before Iceland in its application to join the EU are the fishing quotas. Many citizens of Iceland are concerned that this major sector of the country's economy would be affected badly by the EU quotas.