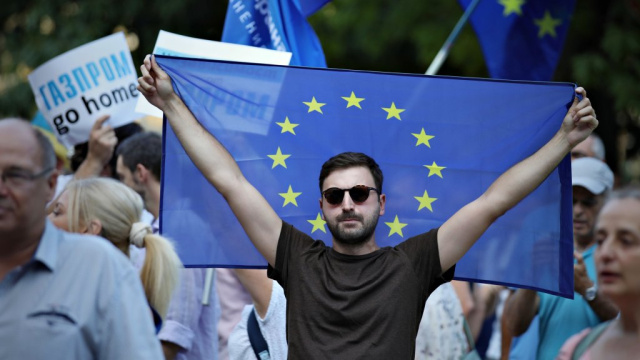 Protesters under the windows of President Rumen Radev tonight will oppose the intention of his caretaker government to re-tie Bulgaria to the Russian Federation through Gazprom.

The demonstration under the caption #ГAЗwithme(#GASwithme) will begin at 6 p.m. in front of the presidency, at 1 Dondukov Blvd.

"Democratic Bulgaria" called on its members and sympathizers to support the protest.

"It is a lie that Gazprom gas will be cheap. It is a lie that it is safe - the Kremlin is stopping and reducing it in a number of European countries at the moment. It is a lie that the issue of Russian gas is only economic - it is the weapon Putin's Russia to subjugate Europe", says "Democratic Bulgaria".

Yesterday DB declared categorically against the return of "Gazprom" as a supplier of gas to Bulgaria and demanded a clear position on the actions of the caretaker government by all political forces that define themselves as professing Euro-Atlantic values.

"We call on the silence of the political forces that will participate in the upcoming parliamentary elections, to stop and to open our eyes wide to the impending betrayal of the official cabinet", is said in the union's position.

In it, "Democratic Bulgaria" asked 6 questions to President Rumen Radev, whose office took a course towards restoring gas supplies from "Gazprom".