"Democratic Bulgaria": The Caretaker Government is Selling Out Bulgaria 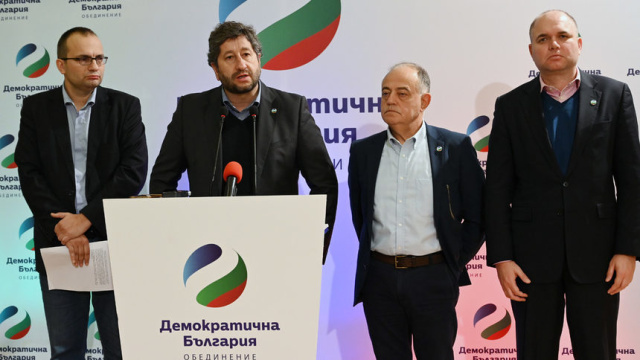 Representatives of the "Democratic Bulgaria"

“’Democratic Bulgaria’ is categorically against the return of ‘Gazprom’ as a gas supplier to Bulgaria and demands a clear position on the actions of the caretaker government from all political forces that define themselves as professing Euro-Atlantic values. We call for the silence of the political forces that will participate in the upcoming parliamentary elections, to stop and open your eyes wide to the coming betrayal of the caretaker cabinet.”

Such a position was sent to the media by the political party "Democratic Bulgaria" in connection with the decision of the caretaker government to renew negotiations with "Gazprom Export" for the restoration of gas supplies.

According to "Democratic Bulgaria", in this way, the caretaker government is selling Bulgaria and trying to return the country to dependence on the Kremlin.

"The government hid behind representatives of employers and unions in the implementation of the obvious plan to return to Russian gas dependence. It made Bulgarian businesses and workers the spokesmen for their misleading and outright false claims. The ‘Donev’ cabinet has proven itself to be the Kremlin's main weapon in the hybrid war in Bulgaria and a vanguard in Putin's war with the democratic world," is said in the position of the political union.

From there, they point out once again that the statement that the prices offered by "Gazprom" are the best is false.

“Obviously, deliveries under the Azeri contract have many times more favorable price conditions, because they depend on the price of oil. The Russian gas under the contract, valid until the end of the year, will not be significantly cheaper than any other gas, because 70 percent of its price is formed by the stock market, and there the price rises”, emphasizes "Democratic Bulgaria".

According to the party, the return to the contract with Gazprom will eliminate Bulgaria's chances of seeking penalties for unilaterally changing the terms of payment in April.

“If Bulgaria meets the Russian conditions and starts paying in rubles, we will experience a national humiliation comparable to our request to become the 16th Soviet republic,” stated "Democratic Bulgaria"

“’Democratic Bulgaria’ calls on the government to urgently develop a plan to compensate households and businesses, strictly targeting them according to the degree of direct damage suffered by businesses and a clear criterion of energy poverty for households, and recommend creating clear incentives to switch to another fuel type where possible to further reduce our dependence on natural gas.

‘Democratic Bulgaria’ has repeatedly warned that a return to gas supplies from ‘Gazprom’ is detrimental to our national interests. Bulgaria cannot afford to tie itself to the main geopolitical weapon of Putin's imperial regime. We continue to insist that they be secured alternative supplies, whatever possibilities there are, and we have pointed them out more than once. We have witnessed the ‘inevitable’ sale of Bulgaria and the restoration of dependence on the Kremlin in the screaming silence of all declared pro-European and democratic parties," reads their position.

1. Who will bear the currency risk if Moscow's ultimatum to pay in rubles is accepted?

2. How much and what will Bulgaria lose, giving up the opportunity to claim compensation for non-fulfillment of the contract by Russia, if it now accepts the ultimatum to pay in rubles and renounces the original terms of the contract?

3. How does the risk of Moscow limiting or stopping supplies in the winter not throw us into a serious gas crisis?

4. Whose interests did the President serve by refusing 6 of the 7 tankers, part of the European Commission's actions to provide alternative gas for Europe?

5. Why did the caretaker government not ask Greece and Turkey for free liquefied gas slots at the highest political level?

6. What do we not know about the caretaker government's unreserved faith in the Kremlin's geopolitical weapon called Gazprom?

The democratic union calls on citizens to protest and support the demands of #ГАЗwithme (#GASwithme was a protest in Sofia in early August with the motto: “Bulgaria – independent from Gazprom”). The next rally under this motto will be held tomorrow at 19:00 p.m. in front of the presidency.