50 Buildings to Be Demolished in Wake of Bulgaria Earthquake 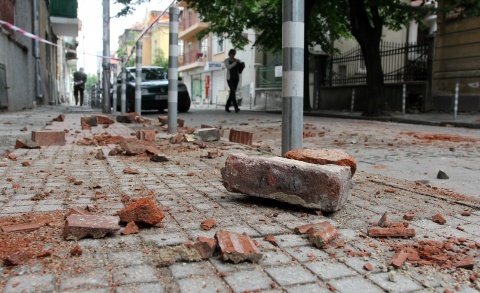 Bulgarian PM Boyko Borisov gave a briefing Thursday detailing future work on the part of the state in the aftermath of Tuesday's 5.8-degree earthquake in western Bulgaria.

The briefing was in the wake of a consultational meeting of the PM with Prof. Nikolay Miloshev, head of the Bulgarian Academy of Sciences' National Institute in Geophysics, Geodesy and Geography.

Borisov announced the introduction a new, streamlined system of information dissemination from the Institute to media and citizen in case of earthquakes.

He further revealed that state authorities have inspected some 14,400 damaged buildings in the region of Pernik, the most hard hit by the tremor.

Some 50 of those buildings have suffered significant structural damage and will have to be demolished, as they are uninhabitable, said Borisov.

The Bulgarian PM assured that in cases when homes will have to be demolished, their owners will receive compensation by the state.

During the earthquake Tuesday morning, at least one house collapsed, roofs were displaced, chimneys and large slabs of bricks and paint were torn off from buildings.