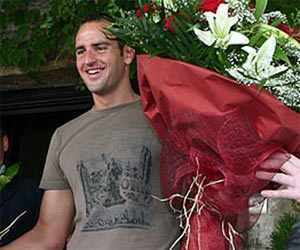 The sportsman became the fastest man to swim across the English Channel, crossing the 40 kilometres separating England from France in under seven hours.

Stoychev crossed the straits of Dover in six hours, 57 minutes and 50 seconds, a full six minutes faster than the time of previous record holder Christof Wandratsch.

The Bulgarian has won the Open Water World Championships seven times and has long targeted the English Channel record, never succeeding until now.