Bulgaria's Interior Admits about Unrest at Refugee Center on Nov 30 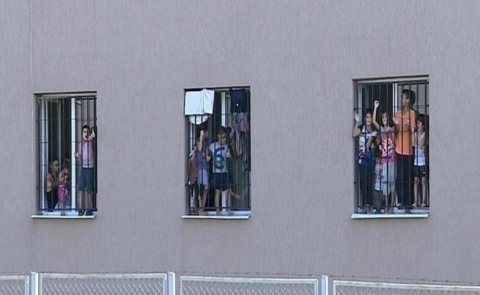 After seven days of silence, Bulgaria's Interior Ministry admitted about a stifled uprising at the refugee center in Lyubimets.

The recognition came after the Algerian Ambassador in Sofia Ahmed Boutache warned in an interview for the 24 Hours daily that he would notify international human rights organizations about the case.

The incident happened on November 30 and several people, including two police officers, suffered injuries amid the unrest, according to mediapool.bg.

Bulgaria's Interior Minister ordered a detailed investigation into the circumstances of the uprising.

The temporary accommodation center in the southern Bulgarian town of Lyubimets currently houses 227 people believed to be Algerian nationals, who entered Bulgaria illegally from Turkey.

According to the account of the Interior Ministry, tensions between people staying at the temporary accommodation center in Lyubimets escalated on the evening of November 30.

As the clashes escalated, property got broken, TV cables were torn, doors were ripped from the hinges, radiator grilles

In order to curb unrest, extra police officers were deployed.

After unsuccessful attempts to engage in talks and an assault by residents of the center, police officers resorted to physical force.

The injured people were handled by a team of doctors from the hospital in Svilengrad, without any serious injuries or fractures reported.

According to Algeria's Ambassador in Sofia, however, Bulgarian police officers resorted to police brutality and beat up a group of Algerians.

He claimed that an inspection of the Algerian Embassy conducted a few days after the incident had yielded clear evidence of violence.

He argued that six had been seriously injured, one was unable to move his legs, and one had an arm plaster cast.

The incident had been triggered by a provocation by staff of the accommodation center.

Before dinner, the people accommodated at the center received chips in exchange for which they were given their meals.

Instead of giving the chip to one of the Algerians, the worker threw it on the ground, while the Algerian refused to take it, saying that he would not have dinner.

To show their solidarity with him, all of the other Algerians did the same, going back to their dormitories and threatening to start a hunger strike.

Then the police officers entered the rooms to get the leaders of the group, but the Algerians refused to let them go and the clashes escalated into a fight.

At 1 am, a number of people accommodated at the center in Lyubimets were taken to the hospital in Haskovo with serious traumas. One had suffered a skull fracture and others had had their arms fractured.

According to reports of private TVstation bTV based on information from the hospital in Haskovo, two immigrants had arm plaster casts and one had suffered a skull fracture.

In an interview for the Bulgarian National Radio, Yotko Andreev, head of the Migration Directorate of the Interior, explained that the police had used physical force and truncheons to get the situation under control.

He suggested that over 120 Algerians had complained about their protracted stay at the center, asking to leave as soon as possible, and after being told that they were staying in the country illegally and had to submit declarations in order to leave, they had declared a hunger strike and had tried to prevent foreigners of other nationalities from getting their meals.