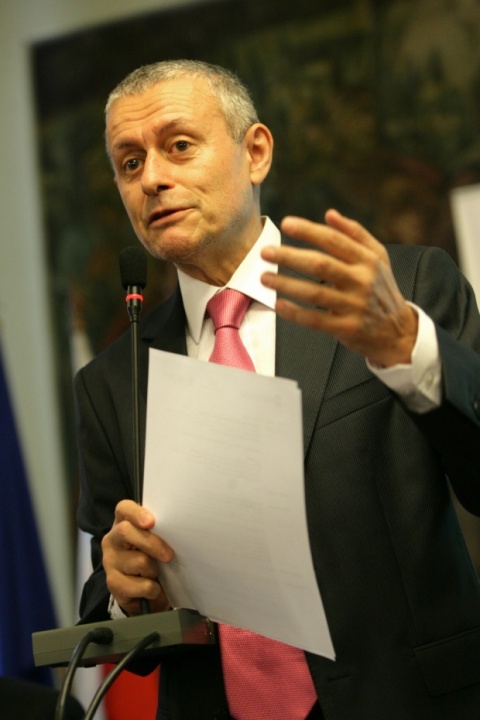 Interview of Novinite.com, Novinite.bg and Novinite.ru with Dr. Solomon Passy, founder and President of the Atlantic Club of Bulgaria and former foreign minister, on the upcoming general elections on May 12.

Solomon Passy is leading the ticket of coalition Center - Freedom and Dignity in the city of Plovdiv.

There he will face former Prime Minister Boyko Borisov, whose Citizens for European Development of Bulgaria party, GERB, resigned on February 21 after mass protests across the country.

At the official launch of the election campaign of coalition Center - Freedom and Dignity in Plovdiv you said former Prime Minister Borisov must thank you for every ribbon he cut. Will those ribbons help Borisov win a second term?

Indeed, several political generations from 1990 to 2007, secured the accession of Bulgaria to NATO and the EU. I had a chance from the very beginning – in 1990 at the Grand National Assembly - to participate actively in both processes until their successful conclusion in 2004, 2005 and 2007. I did this with the help of three successful teams: the right-wing UDF, the Atlantic Club and National Movement for Stability and Prosperity, NMSP, which now runs as part of the coalition Center - Freedom and Dignity under No 6 on the ballot. So anyone who cuts ribbons and inaugurates brand new buildings, constructed thanks to EU funds, should talk in the first person, but the plural form.

How would you describe the pre-election campaign so far? What are your impressions from your meetings in the city of Plovdiv, where you run for MP?

Decades ago, when we were kids, we knew that Plovdiv is the second-biggest city in Bulgaria, which is striving to become the country’s best city. Latest economic data however shows that Plovdiv is lagging far behind, sharing the fifth spot with the Danube town of Ruse. It is preceded not only by the capital Sofia, but also by the cities of Varna, Burgas and Stara Zagora.

Our team offers the city a vast range of international contacts. In April we invited diplomats to lobby for making it European Capital of Culture. But it seems to me that local authorities are not that interested in this initiative.

I served as a member of parliament for eight years after winning elections in the coastal city of Burgas. I know perfectly well that MPs can do a lot to help the region, where they were elected, provided that local authorities are actively cooperating.

To what an extent will the wiretapping scandal harm the approval ratings of the until-recently-ruling party GERB?

Obviously and quite expectedly GERB is not riding the popularity wave any more. But there is one even more interesting fact – people, who are not Borisov's supporters and voters, show zero tolerance for him. Alas, his international reputation still stains Bulgaria’s image.

Did the eavesdropping scandal help boost ratings of opposition parties?

What matters is that the scandal hurt Bulgaria’s image. It became clear that the European Union has decided to postpone Bulgaria’s accession to Schengen because of concerns over Borisov’s reputation, which later on proved to be legitimate. All moves for pushing forward the process from now on will be much more difficult.

Bulgaria's center-right GERB party, which was forced to resign under public pressure in February, keeps its lead, according to polls prior to the elections on May 12. How would you comment on that?

Just ask the voters in the city of Plovdiv how many times they have had the chance to see Borisov here? Why is he hiding from the people? He tops the ticket of his party in Plovdiv after all!

Do you think Bulgaria’s upcoming crucial general elections are at risk of being rigged? What indications do you have?

We witnessed the first manipulations as early as in 2009. Just think about how many columns in the newspapers and how many hours during the TV programs were dedicated to Borisov? In this respect I am pretty sure he can be named champion of Europe, although he is lagging behind the leader of North Korea.

This is a coalition made up of people with similar ideas and principles. The coalition gives - for the first time since 1990 - a real choice for Bulgarian ethnic Turks, whose votes were previously monopolized by the Movement for Rights and Freedoms (MRF). Coalition # 6 will take care of both the majority of people, as well as the minorities: Armenians, Roma, Russians, Jews. My expectation is that our coalition will limit the potential of nationalist Ataka party, which has capitalized so far on the political monopoly of the MRF over the votes of Bulgarian Turks.

If we happen to be the party to appoint Bulgaria’s next prime minister, people doing business in the country can rest assured they will work in calm and predictable environment. I have been a member of the American Chamber of Commerce for almost 20 years, I know the problems, but also many of the solutions.

Bulgaria will join the club of the best economies – the Organization for Economic Cooperation and Development (OECD), which is a bank for the world's best practices in all public non-military spheres.

We will tailor Bulgaria’s role in the EU and NATO and make its profile more specific.

We will overhaul the country’s healthcare and education systems, using the experience of the Organization for Economic Cooperation and Development (OECD), instead of learning by trial and error or changing the health minister four times within four years, like the previous government did.

We will begin the most strategic project: a demographic strategy to tackle the terrible trends that do not bode well for Bulgaria’s future.

At which moment did Bulgaria lose its direction?

Ever since January 1, 2007 not a single Bulgarian leader has been able to formulate new strategic goals or implement needed reforms in the country.

Our coalition has the potential to do that. Moreover, we want and we can push for implementing reforms across the entire European Union. Our initiative for common mobile phones chargers paved the way for Bulgaria as a major factor in European policies concerning standardization, eco-design, climate action. These are areas where improvements can be made not only in Bulgaria, but across the EU.

In science we can and must pave Bulgaria’s way into the European agenda. A simple but illustrative example is that only Bulgaria out of all EU members has refused to get integrated into the European Space Agency, which would have allowed it to use the scientific and technological capacity of both the EU and NASA in this area.

Do you think that the early elections, a new parliament and a new government can lead Bulgaria out of the crisis?

Miracles don’t happen! But if a well-balanced team with a mission and a long-term vision takes the helm of the country, it can definitely give the initial impetus for major processes and show people the way. This is exactly how in 1990 we laid the foundations of project, which showed the way for over 20 years.

Is it realistic to expect that the next parliament is capable of winning back people’s trust?

The issue is to a larger extent in the hands of the media, rather that the parliament. It so happened that the freedom of speech in Bulgaria’s media or rather the lack of it raised concerns not only across the country, but the whole of Europe.

What if none of the new parties and coalitions manages to pass the threshold for entering parliament? The votes they garner will benefit the bigger players – GERB, BSP, MRF?

Latest surveys show quite the opposite. Besides I firmly believe that one should fight for good and fair causes from the very beginning, long before they gain popularity. A case in point is Bulgaria’s NATO entry.

Were you surprised by polls, which said coalition Center - Freedom and Dignity may spring the biggest surprise of the 2013 elections?

Not at all! I have always known that if we work hard enough, results will come.

Do you agree that the elections are the beginning of the end for Borisov even if his party wins most votes?

All I can say is that his place is not in the Bulgarian or European institutions.  Borisov brought sadness to his own people and shame for Europe.

If the polls are right and GERB does not win enough votes to govern on its own, it could form a minority government. Will its coalition partners insist that Borisov quits?

I sincerely hope that GERB will not garner enough votes to form the next government, with or without coalition partners. This is a very dangerous scenario for Bulgaria.