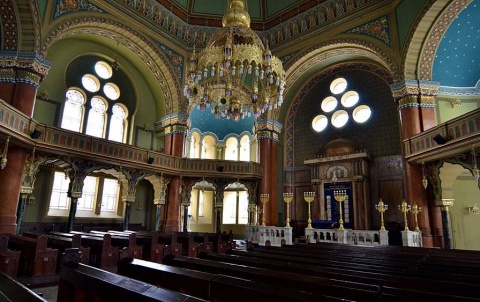 The interior of Sofia's Great Synagogue. Photo by BulgariaTravel.org

The Jerusalem Post has printed a material alleging that a special unit of the Iranian Revolutionary Guard has surveilled the synagogue in Bulgarian capital Sofia as a possible attack target.

According to the newspaper's sources, this happened days after the July 18, 2012 attack against Israeli tourists in the Bulgarian resort city of Burgas.

The Post quotes a 2013 Washington Institute for Near East Policy report entitled "Hizballah and the Qods Force in Iran’s Shadow War with the West."

According to this report, an officer of the elite Quds Force, part of the Revolutionary Guard, was arrested by Bulgarian authorities while inspecting the Sofia Synagogue.

The information was then revealed to the report's drafter by Israeli intelligence.

The Jerusalem Post recalls that in January 2012, the site YNetNews had published a material under the heading "Possible target? The Great Synagogue in Sofia."

"The new materiel disclosed by the Post adds additional hard evidence to a possible joint Hezbollah-Iranian operation to attack the synagogue," claims the Post.

The paper writes of two alleged foiled anti-Israeli Hezbollah operations in Bulgaria and Greece in early 2012, and likens the spying on the Sofia Synagogue to the operations of the Hezbollah agent arrested in Cyprus over the summer.

After July 2012 Burgas bus bombing, Israel was quick to throw the blame for the attack on Hezbollah and Iran.

A Hezbollah involvement was acknowledged by the Bulgarian government only in early 2013.

Regarding the alleged Quds agent in Sofia, the Jerusalem Post says it has contacted Bulgaria's Ministry of Foreign Affairs and Ministry of Interior, but was referred to the State Agency for National Security (DANS), which is working on a position.