Hopeful Obama Looks Forward, Says the Best is Yet to Come 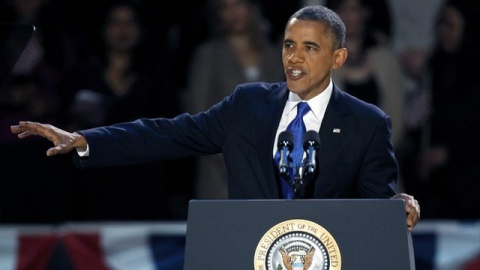 US President Barack Obama is pictured as he is delivering his acceptance speech shortly after being elected to a second term in office. Photo by EPA/BGNES

US President Barack Obama thanked voters and promised them the best is yet to come as he delivered his acceptance speech shortly after being elected to a second term in office.

"Thank you for believing all the way. You lifted me up the whole way and I will always be grateful," Obama told his campaign team at the Chicago camp in McCormick Place, smiling, but not looking too exultant.

He also thanked the "happy warrior", Vice-President Joe Biden, as well as his own wife, Michelle, and his daughters Sasha and Malia. His campaign team and volunteers got a huge round of applause when he called them the "best ever in the history of politics".

Obama thanked everyone who campaigned and who voted, for either party. And he acknowledges the long waits at polling stations around the country, saying: "By the way we have to fix that."

"We have picked ourselves up, we have fought our way back and we know in our hearts that for the United States of America the best is yet to come," he said.

He pledged to work with Republican leaders in Congress to reduce the government's budget deficit, fix the tax code and reform the immigration system.

"We are an American family and we rise and fall together as one nation," he said.

He emphasized his main campaign theme of fighting for equal opportunity for all, saying the political arguments that come with democracy in America were a necessary part of the process.

"We will disagree, sometimes fiercely," Obama said, noting that "progress will come in fits and starts" and the victory Tuesday night "won't end all the gridlock."

When he finished, the first family and Vice President Joe Biden and his family joined him onstage in a celebration of waves, hugs amid a blizzard of confetti.

Obama surpassed the decisive 270-vote threshold in the Electoral College with victory in Ohio. That and a later projected victory in another swing state -- Virginia -- gave him 303 electoral votes to 206 for Romney, according to the CNN call based on unofficial returns.

In what has been unanimously described as a classy move, the website of the failed Republic challenger Romney streamed the president's acceptance speech.