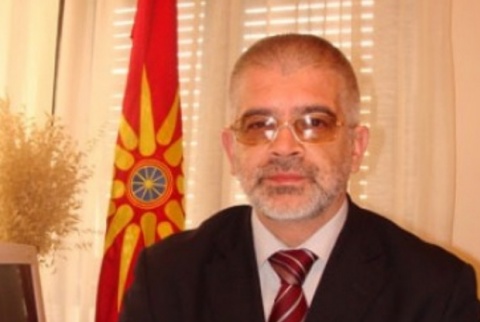 Todor Petrov, the chair of the "World Macedonian Congress", an extremist Macedonia NGO, has come up with a propaganda article against Bulgaria that appears borderline insane. Photo by Vecer

There are no Bulgarians, only "Macedonians", in Bulgaria, according to a propaganda article in a Macedonian newspaper that appears to stretch the boundaries of sanity.

The article in the Macedonian daily "Vecer", entitled "There Is Anything But Bulgarians in Bulgaria", is authored by Todor Petrov, the chairman of the so called "World Macedonian Congress", an ultranationalist Macedonian NGO, close to the ruling Macedonian party VMRO-DPMNE of Prime Minister Nikola Gruevski.

The author even goes on to suggest that Bulgaria needs to have "ethnic Macedonians" in order "to keep the demographic balance in time and space".

Juggling "historical facts" apparently invented by the "Skopje historians" to justify the creation of a Macedonian nation by Communist Yugoslavia, Petrov states that the Balkan Peninsula should be called "the Macedonian Peninsula", and that the Macedonians from Macedonia, the Former Yugoslav Republic of Macedonia, must help the people "on the other side of the border" because they are apparently deluded that they are Bulgarians, and because they are "our (Macedonian) people".

The aggressive ultranationalist propaganda article by Todor Petrov, whose name paradoxically appears to bear the tradiotnal Bulgarian suffix "-ov", unlike the suffix "ovski" introduced by communist Yugoslavia to root out the Bulgarian sounding of the families names in the region of Macedonia, is of the sort that often appears in the Macedonian press, and is in line with Skopje's policies towards Bulgaria in the past 20 years which feature nationalist propaganda moves by Macedonia that periodically exacerbate the bilateral relations.

For example, in 2011, Macedonia's Foreign Minister Nikola Poposki was ultimately forced to refute a propaganda piece published in August 2011 by Macedonian newspaper Dnevnik stating that some 750 000 "ethnic Macedonians" live in Bulgaria, according to figures provided from the Foreign Ministry in Skopje.

The "World Macedonian Congress", among its mind-boggling statements, is famous for creating the "Macedonian Prayer", written by Niche Dimovski, its Vice President, aired in a 9 minute video on Macedonian Radio-Television (the public broadcasting organization of the Republic of Macedonia), in which the God is presented calling the people of the Republic of Macedonia "the oldest nation on Earth" and progenitors of the "white race" who are described as "Macedonoids" in opposition to "Negroids" and "Mongoloids".