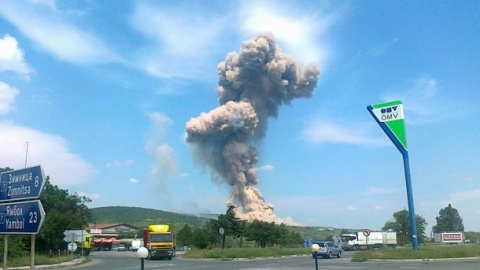 Explosions have been heard, the first ones at around 2:40 pm local time. Photo by the Bulgarian National Radio

Explosions have occurred at a private ammunition depot near the Southeastern Bulgarian village of Lozenets, forcing local authorities to temporary close the the major Bulgarian road junction known as "Petolachkata".

The first blasts were hear at around 2:40 pm local time.

A total of seven employees of the ammunition depot have been injured, according to the Bulgarian Health Ministry. There have been no reports of casualties.

The village of Lozenets, located near the town of Straldzha is currently being evacuated, local media say, citing witnesses.

Representatives of the Sofia-based company that manages the ammunition depot are said to be on their way to the scene of the accident.

Police vehicles, ambulances and fire trucks have already arrived at the place.