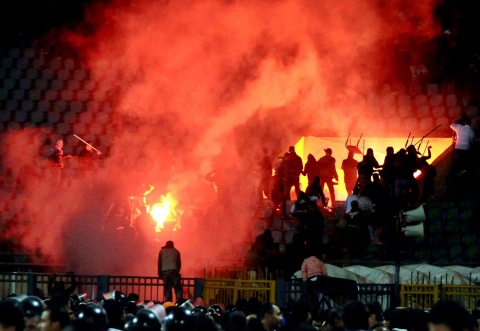 Egyptian football fans seen during clashes as security forces stand on the pitch at the stadium of Port Said, Egypt, 01 February 2012. EPA/BGNES

An Egyptian soccer game between top-tier teams al-Masry and al-Ahly turned in to a tragic nightmare, as clashes broke out after the final whistle leaving at lest 74 people dead.

At least 1 000 were reported injured as fans invaded the pitch after the match, the incident being described as the deadliest in the country since the fall of Hosni Mubarak.

On Wednesday, Port Said side al-Masry recorded a rare 3-1 win against visiting side al-Ahly, one of Egypt's top football clubs.

The atmosphere was tense throughout the match - since an al-Ahly fan raised a banner insulting supporters of the home team, BBC reports. As the match ended, their fans flooded onto the pitch attacking Ahly players and fans.

Most of the deaths were caused by concussions, deep cuts to the heads and suffocation from the stampede, according to officials.

"The events in Port Said are planned and are a message from the remnants of the former regime," Essam Erian, an MP with the Brotherhood's Freedom and Justice Party, said in a statement.