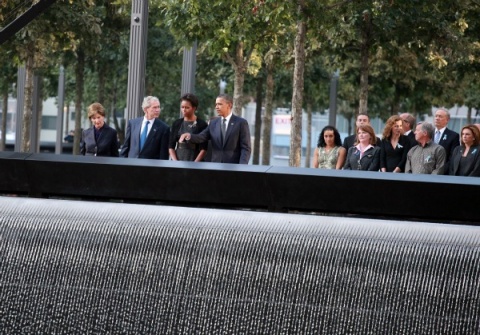 President Barack Obama was joined by former President George W. Bush at the site of the World Trade Center in New York, a moment of bipartisan unity to honor the dead reminiscent of the way the country came together in the wake of the attacks.

The United States marked the 10th anniversary of the Sept. 11, 2001 terrorist attacks Sunday with prayer and remembrances at the sites where thousands of Americans died.

Attending a simple, but solemn ceremony, President Barack Obama was joined by former President George W. Bush at the site of the World Trade Center in New York, a moment of bipartisan unity to honor the dead reminiscent of the way the country came together in the wake of the attacks.

Hand in hand with their wives, they walked to the site as the ceremony opened at 8:46 am, the precise moment the first hijacked plane smashed into the first tower. A church bell rang twice.

Obama's hand grazed the bronze panels bearing the names of the dead, part of the moving memorial formally dedicated Sunday. They went on to the North Memorial Pool, built on the footprint of the World Trade Center's North tower.

"God is our refuge and strength, a very present help in trouble," Obama read from Psalm 46. "Therefore, we will not fear, even though the earth be removed and though the mountains be carried into the midst of the sea, though its waters roar and be troubled, though the mountains shake with its swelling."

Bush read of sacrifice from a letter written by Abraham Lincoln to a mother who lost five sons in the Civil War.

"Ten years have passed since a perfect blue sky morning turned into the blackest of nights. Since then, we've lived in sunshine and in shadow," New York City Mayor Michael Bloomberg said. "And although we can never unsee what happened here, we can also see that children who lost their parents have grown into young adults, grandchildren have been born, and good works and public service have taken root to honor those we loved and lost."

The mayor said they were "2,983 innocent men, women and children" who were slain during the attacks. "Each had a face, a story, a life cut short from under them."

Posters, t-shirts, photos and other commemorative items worn or clutched by victims' family members displayed the range of perspectives on their loss.

While many depicted images of the victims with captions such as "We miss you," or "Never Forget," some did not reflect the same sense of closure. A poster dedicated to Marya Valdes Rodriguez, for example, showed two photos of the young woman, one of them capped with the text, "Missing Person."

"Ten years 'later' and it still seems like 'yesterday,'" the poster read.

At the heart of the city's ceremony is the reading of the names of the victims of the attacks, including those who were killed at the Pentagon and in Shanksville, Pa., as well as the six who died at the World Trade Center bombing in February 1993. The names are being read in pairs by 334 people; the readers this year are the victims' family members.

The ceremony took place under the threat of terror attack, the audience there by invitation only, the leaders behind bulletproof glass.

Chundera Epps, whose brother was on the 98th floor of the north tower, said it still hurts 10 years later.

"When it comes to family gatherings that's when the hurt comes in," Epps said. "The first thanksgiving all we did was cry, we couldn't even eat."

Some wore shirts bearing images of those who perished in the attacks, or carried signs with pictures of loved ones and the words "never forget." Surrounding the site, U.S. flags flew under a sunny sly at half mast.

Obama left the site precisely at 9:11 am, bound for Shanskville, Penn., to honor the passengers of United Flight 93. They died while stopping their hijacked plane from reaching its intended target, the U.S. Capitol or the White House.

Bush and former President Bill Clinton dedicated a memorial at the Pennsylvania site on Saturday.

At the Pentagon, guests observed a moment of silence at 9:37 am, the same moment that a hijacked plane hit there on Sept. 11, 2001.

Defense Secretary Leon Panetta saluted the members of the U.S. military who've served overseas since 2001 to hit the al Qaida terror network and safeguard the U.S. against new attack. More than 6,200 members of the armed services have died, he said.

Vice President Joe Biden attended the Pentagon ceremony, where he praised the courage of the family members of the attack's victims.

"I know these memorials — and you've been through many — are bittersweet moments for you, because as you sit here right now, unlike a month ago, everything's come back in stark relief. It's not a thought, it's precise. You remember that God-awful empty feeling, you remember being sucked into your own chest and that feeling of hollowness," he said.

"But I want you to know something else," he added. "Your physical presence here today gives hope to thousands of Americans who under different circumstances are trying to come to grips with the losses that you had."

Obama was scheduled to visit the Pentagon later Sunday to lay a wreath, then to attend a memorial "Concert for Hope" at the Kennedy Center.

The 10th anniversary marks the official opening of the National September 11 Memorial—twin reflecting pools that sit within the footprints of the Twin Towers and feature bronze panels on which the names of the dead are inscribed.

A 9/11 museum is scheduled to open at the World Trade Center site next September.