Bulgaria Fails to Launch Lyulin Highway Ahead of Schedule 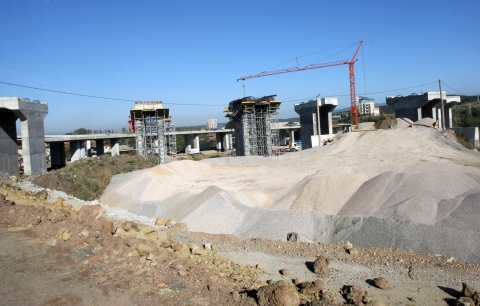 The Lyulin Highway will not be opened ahead of schedule. Photo by BGNES

The much anticipated Lyulin Highway leading west of Sofia will be opened on May 15 even though the Bulgarian government hoped to open one of its lanes on March 15 to alleviate the traffic.

The 19-km Lyulin Highway from Sofia to the Daskalovo road junction should be formally completed by May 15, 2011, after some three years of delay caused by what has been seen as inadequate state regulation and questionable construction practices by the Turkish company Mapa Ghengiz.

The Daskalovo junction connects two major highways in Southwestern Bulgaria, which are still under construction – the 19-km Lyulin Highway, and the 156-km Struma Highway, as well as roads leading to Macedonia and Serbia.

The construction of the Lyulin Highway, which should be the first completed highway in Bulgarian history, was inspected Monday by the management of Road Infrastructure Agency confirming that it cannot be launched ahead of schedule even partly.

The Agency has complained that Bulgarian drivers have already started to use the highway illegally which debilitates the construction; because of the many subcontractors it is hard for the traffic control to discern between those working on the spot and others taking advantage of the situation.

A total of 90% of the Lyulin Highway have been completed; Bulgaria has paid a total of EUR 185 M for that – a staggering price considering the short length of the highway; it is often justified with the rough terrain.

The construction was pushed last year, after the EC threatened that Bulgaria will lose the ISPA program funding.

The project cost was first estimated at EUR 148.4, which includes EUR 111.3 funded by ISPA. In 2010, the cabinet gave an additional EUR 43 M, after the Turkish contactor, Mapa Ghengiz, asked for compensations for the delay, caused by the State over infrastructure technology and expropriation of private lands.

During one of his visits of the road, Borisov said Turkish companies will no longer be allowed to do construction works in Bulgaria if Mapa Ghengiz fails to adhere to the deadlines.