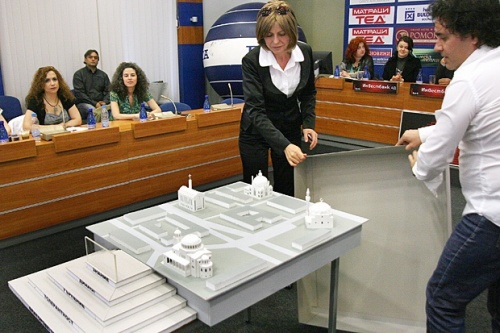 The new top tourist attraction of the Bulgarian capital Sofia will be a model of the four religious temples in its very downtwon, according to the city’s Chief Architect Petar Dikov.

The life-size model displaying the St. Nedelya Orthodox Church, the Sofia Mosque, the Sofia Synagogue, and the Catholic Cathedral will be situated in the so called “Sofia Largo – the area between the buildings of the Presidency and the Council of Ministers, which is pretty close to the location of the actual temples along the Maria Luisa Blvd.

The four model buildings will be in a scale of 1:25 compared, and will be located on an area of 100 square meters.

“Sofia is the only European city whose downtown features in a friendly fashion a synagogue, a mosque, an orthodox cathedral, and a catholic temple on an area of less than 1 square km,” said Sofia Architect Petar Dikov.

“The life-size exhibit of the models of the four temples will include sound, lights, a spectator hall, a transparent roof, and interactive features,” he explained adding that the “Sofia – Wisedom in Action” project is supposed to be an element of the project for the “Archaeological Complex Serdika-Sredets” - the initiative of the Sofia Municipality and the Culture Ministry to excavate and display in the very downtown of the city the traces of its Thracian, Roman, Byzantine, and Bulgarian past.

“The model buildings will be crafted in a very precise way. We will provide sound information in Bulgarian, English, French, Russian, and German. One of the features will be to listen to the actual religious services performed inside the respective temple at the same time while viewing the model,” elaborated the Sofia Architect.

The project is expected to be completed and inaugurated in April 2011 for the 132 anniversary since Sofia was declared Bulgarian capital. The funds for the realization fo the project have been collected from private sponsors and donations, and the municipality will not be spending any money on it, announced Sofia Mayor Yordanka Fandakova.