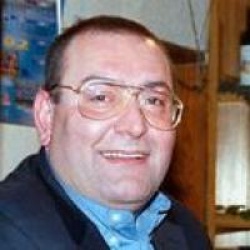 Fatik, whose brother-in-law Deniz Turkmen was arrested in Bulgaria, was killed in a mafia raid in Sofia in 2003.

The Court of the southern Bulgarian District of Haskovo has issued an order for the permanent detention of Deniz Turkmen who is the brother-in-law of “legendary” Bulgarian mafia boss of Syrian origin, Filip Naydenov, aka Fatik.

Filip Naydenov – Fatik was was killed in an AK-47 raid on a central boulevard in Sofia in 2003.

Deniz Turkmen was arrested in the southern Bulgarian town of Svilengrad while he was on a train entering Bulgaria from Turkey on Sunday according to a European Arrest Warrant issued by the District Court of Marseille, France.

Turkmen is wanted by the French authorities over frauds, and is also wanted by INTERPOL. He is believed to have been the head of an organized crime group involved in the trafficking of stolen luxury cars, including three cases in which Bentley cars were rented, their documents were forged, and they were exported and sold in Turkey.

Upon his arrest, Turkmen presented an Irish passport on the name of Dimo Tshondiya. He told the police he came to Bulgaria because he wanted to see his children.

Turkmen was deported from Bulgaria in 2001 as a threat for the country’s national security, and was banned from entering it again. Turkmen is alleged to have been involved in illegal arms and drug tracking in Bulgaria.

He is the brother-in-law of Filip Naydenov – Fatik, and the son-in-law of Fatik’s father, Ismet Shaban. Ismet Shaban is known to have come to Bulgaria in the 1960s with his family and to have helped the so called “State Securty”, the secret police and intelligence of communist Bulgaria, to set up channels for the trafficking of Captagon pills, drugs, and arms to countries in the Arab world. This was part of the “secret trade” of the Bulgarian communist regime.

As a result, Shaban’s family enjoyed a number of privileges in communist Bulgaria. After the end of the communist regime, Shaban’s son, who took the Bulgarian name of Filip Naydenov, is said to have inherited his father, and much of the already “privatized” secret trade of the former communist regime, and to have been involved in dealings with all major organized crime groups in the country. He was brutally murdered on the Gotse Delchev Blvd in downtown Sofia in 2003 by AK 47 Kalashnikov shooters.

Fatik’s brother-in-law, Deniz Turkmen, is going to remain in the arrest until the Haskovo Court rules on the request for his extradition to France.