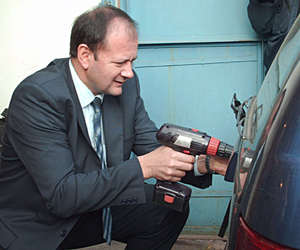 The issuing of EU license plates is starting for the first time on Monday as a pilot project in only three Bulgarian districts - Vidin, Gabrovo, and Smolyan.

The EU license plate has a small image of the EU flag - twelve gold stars on a blue field - in its left-most part, and a code for the respective country consisting of one to three letters of the Latin alphabet. Bulgaria's code will be BG.

In Vidin the Interior Minister Mikov also opened a new training facility of the local Interior Ministry directorate built with funds from the EU, the local municipal administrations, and local firms.