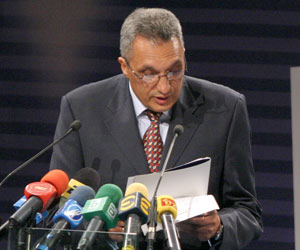 DSB leader Ivan Kostov read the party's statement during Friday's session of the parliament, saying the president lied when he claimed he did not go hunting on March 1, a day after the tragedy.

According to local newspaper Struma Daily, the Bulgarian head of state went hunting in the Kumatinitza region close to southern town Simitli and was accompanied by the head of the Customs Agency Asen Asenov. The paper also reported the hunting was organized by the head of the local forestry unit.

The Press Service of the Bulgarian Presidency announced in reply to the Struma publications that the President did not take part in any hunting events though he actually was in the Simitli area on March 1.

According to Kostov, it is absolutely intolerable that the president, who represents the unity of nation, blatantly ignored the grief of society.

Nine people were charred to death and nine more were injured after two cars of the night train going from Sofia to the northeastern town of Kardam burst into flames minutes after midnight on February 29.