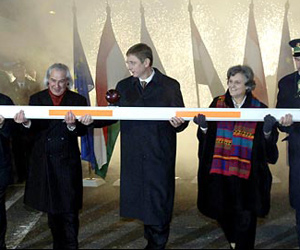 Hungarian PM Ferenc Gyurcsany (C) and his ministers hold a dismantled barrier celebrating the expansion of the border- free Schengen zone. Photo by BBC
The European border and passport-free Schengen zone of the welcomed nine new member countries on Friday in its largest expansion ever.

The zone now includes 24 nations with 400 million people. Estonia, Latvia, Lithuania, Malta, Poland, Hungary, Slovenia, Slovakia, and the Czech Republic, which all joined the EU in 2004, tore down border barriers at midnight celebrating the abolition of inner border control.

"I wish to congratulate the nine new Schengen members, the Portuguese (EU) presidency and all EU member states for their efforts. Together, we have overcome border controls as man-made obstacles to peace, freedom and unity in Europe, while creating the conditions for increased security," European Commission President Jose Manuel Barroso hailed the enlargement.

"An area of 24 countries without internal borders is a unique and historic achievement," Vice President Franco Frattini added.

Passport checks will still be performed only at airports of the new members, where they are to be canceled in March 2008.

The border-free area was established in the Luxembourg village of Schengen where in 1985 the Benelux countries, Germany, and France signed an agreement on the gradual canceling of checks at their common borders.

Bulgaria, Romania and Cyprus are yet to meet necessary requirements to join the zone.