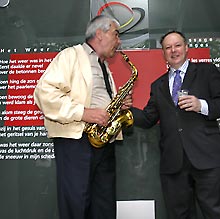 Besides the Netherlands, Luxembourg, Sweden and the United Kingdom, Belgian verses were unveiled Wednesday to mark the signature of EU Accession Treaty by Bulgaria, held April 25 in Luxembourg.

Under the project, each embassy has adopted a wall in the centre of Sofia meant to be decorated with a poem in the language of its country. The aim of the project is to promote the diversity of European languages and letters.

The initiative is carried out by the embassies of EU Member states, the aspiring countries and the European Commission.