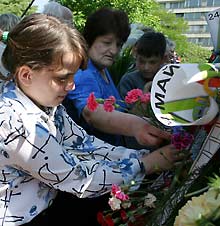 "The written word and the Christian faith helped the Bulgarian nation survive the ups and downs of time," Culture and Tourism Minister Nina Chilova said in her speech in front of the National Library where stands the monument to the Holy Brothers.

In her words cultural identity is what will connect Bulgarians with the rest of Europe.

In the 9th century the Holy Brothers Sts. Cyril and Methodius created the Slavic alphabet and made the first translations in it. Their disciples introduced the alphabet in Bulgaria, putting the beginning of its journey to the world. Several centuries later, Patriarch Evtimii launched a literary reform and updated the alphabet, assuming that words are the expression of the divine essence of things.

The Bulgarian Cyrillic alphabet has been in existence for more than eleven centuries, but it will be introduced for the first time in the European Union after the country obtains full membership.

During his visit to Bulgaria in 2002 he described the lifework of Cyril and Methodius as "a great contribution to the shaping of the common European Christian roots which, thanks to their depth and viability, define one of the most important landmarks of culture which must be a point of departure for any serious attempt to reinvent the current unification of the continent."

The culture hymn dedicated to the deed of Bulgarian enlighteners Saints Cyril and Methodius is performed every year on May 24 to celebrate education, the belief in the light of knowledge and the power of science.

The authentic text of the highly worshipped hymn was created by Bulgarian poet Stoyan Mikhaylovski and published for the first time in 1892. Nine years later prominent composer of Bulgaria came across the poem "March ahead, o revived people!" in a textbook of one of his students and was inspired to write down its music. It was May 9, 1901.

The hymn has been translated into 21 EU languages, including Romanian, and published for circulation in all Member countries of the Union.

The multi-language edition of the hymn was officially presented in the middle of March at Sofia University where Jan Figel, The European Commissioner responsible for Education, Training, Culture and Multilingualism arrived at the invitation of Bulgarian Euro-Affairs Minister Meglena Kuneva.