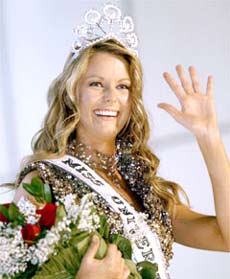 Jennifer Hawkins was chosen from among 80 beauty queens. It is the second time an Australian has won the pageant since it began in 1952. The other Australian victory belonged to Kerry Anne Wells in 1972.

Presenters had said more than 600 million people around the world would watch the pageant, which is produced jointly by U.S. tycoon Donald Trump and NBC Television.