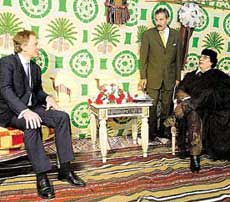 Colonel Qaddafi insulted Tony Blair by pointing the sole of a shoe towards him, Arab experts said yesterday.

They spoke of their shock and claimed it was a "deliberate act", as images of the historic meeting in Tripoli flashed around the world. Close watchers of the talks in a tent on Thursday between Mr Blair and the reformed Libyan leader noticed Qaddafi's foot pointing towards Mr Blair.

Yesterday, as more photos of their encounter were studied, influential Arabs said Qaddafi was offering the worst of all insults.

In the Arab world, shoes are considered unclean - signifying the lowliest and dirtiest part of the body.

Abdel Bari Atwan, editor of the London-based Al-quds newspaper, said: "I'm completely shocked. The only thing worse would be a physical attack."

Ibrahim Nawar, head of Arab Press Freedom Watch, said: "It was a deliberate act. He wanted to make Tony Blair look very, very small. You never show your shoe to anyone you remotely respect.

"Blair must know enough about Arab culture to realise he was being humiliated." The Muslim Association of Great Britain said: "This shows Qaddafi hasn't changed."

Chris Doyle, director of the Council for British-Arab understanding, said: "If it was intentional, Qaddafi may have been trying to cover himself. He's saying, 'Yes I'm having a make-up with this man, but I'm still not entirely happy about it'."

When Saddam Hussein's statue was toppled in Baghdad last April, Iraqis flung their shoes and flip-flops at it.

It is also no coincidence that an impression of George Bush Snr's face was on a tiled mosaic at the entrance to Baghdad's Al-Rashid hotel. Downing Street refused to comment yesterday.