Day 333 of the Invasion of Ukraine: Russian Politician warned of a "Global Catastrophe" due to the Supply of New Weapons to Kyiv 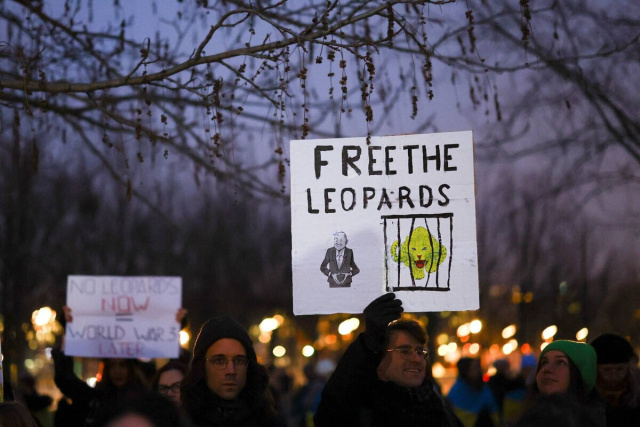 The Russian army said yesterday that it had begun "offensive operations" in the Zaporizhzhia region, southern Ukraine, AFP reported.

On Friday night, the Russian occupation authorities reported a "strong increase in the intensity" of fighting in this region "along the entire front line".

In yesterday's bulletin, the Ukrainian army only noted that it had shelled a dozen southern villages on Friday.

The contact line between Ukrainian and Russian troops in Zaporizhzhia has barely moved for months, and there has been no major fighting there, unlike in southern Kherson Oblast (until November) and eastern Donetsk Oblast, where fighting continues.

Yesterday intense fighting took place around the town of Bakhmut (Artyomovsk); Russian forces there were backed by the private military company Wagner, which the US called a transnational criminal organization yesterday.

According to a senior US official, Ukraine should still focus efforts on preparing for a powerful counter-offensive in the spring, rather than focusing on defending Bakhmut, which is largely destroyed and left almost depopulated.

But Bakhmut has become a political symbol, with Ukrainian President Volodymyr Zelensky visiting front-line fighters there in December to inspire them, and Russia would like to show success after a series of setbacks in the autumn.

Warsaw: Berlin's attitude towards the supply of Leopard tanks to Kyiv is unacceptable

The Polish prime minister today called Berlin's refusal to supply heavy tanks "Leopard" to Kyiv, which has been pressing for them while Russian forces are on the offensive, "unacceptable", reported AFP.

"Germany's attitude is unacceptable. Almost a year has passed since the beginning of the war. Every day innocent people die. Russian bombs devastate Ukrainian cities. Civilian objects are attacked, women and children are killed," Mateusz Morawiecki told the PAP agency.

He spoke two days after a meeting of nearly fifty countries at the US base in Ramstein, Germany. Ukraine's allies there announced significant new arms deliveries to Ukraine, but failed to agree on delivery of heavy tanks despite repeated demands from Kyiv.

Poland's prime minister said he expected a "clear statement" from Berlin that it would allow the shipment of German-made Leopard tanks from countries that have them. Poland says it is ready to supply Kyiv with 14 such machines and is discussing the matter with fifteen other countries.

In the event that Berlin refuses to supply Kyiv with Leopard tanks, "we will create a small coalition of countries ready to donate their modern equipment, their modern tanks to Ukraine, which is in difficulty," Morawiecki said.

Yesterday, the foreign ministers of the three Baltic countries called on Germany to deliver Leopard heavy tanks to Ukraine "even now" and stressed that "Germany, as the first European power, bears a special responsibility in this regard."

The founder of the Russian private military company (PMC) "Wagner" Yevgeny Prigozhin wrote an open letter to the coordinator of strategic communications at the National Security Council in the White House, John Kirby, in which he asked him what crime his organization had committed, TASS reported, quoted by BTA.

"Dear Mr. Kirby, I have a question for you: can you specify what crime PMC Wagner has committed?" said the letter, published today on Telegram by Prigozhin's press office and also quoted by Reuters.

Kirby announced yesterday that the US government would declare Wagner a transnational criminal organization, which would allow the US and other countries to clamp down on the mercenary army's international business and its international network of supporters.

"Wagner" is a criminal organization responsible for atrocities and violations of human rights in Ukraine and around the world, Kirby said, quoted by world agencies. He also said that next week the US government will impose specific sanctions against the Wagner group, but did not specify what.

Russian MP: 'The Gulag Archipelago' - off the school curriculum

“Works that have not stood the test of time should be excluded from school curricula,” believes Dmitry Vyatkin - first deputy chairman of the parliamentary group of President Vladimir Putin's United Russia party.

"As the historical analysis of the ‘Gulag Archipelago’ showed, many facts were sucked by Alexander Isaevich (Solzhenitsyn) from his fingers, they were invented. Historians checked all the facts. There was an attempt for him to receive an award for this - for bringing his own homeland into the dirt," the deputy told TASS.

In fact, Solzhenitsyn won the Nobel Prize for Literature for his work. It was printed abroad. As a result, a campaign was organized against the writer and he was eventually expelled from the USSR.

After the end of communism, Solzhenitsyn was rehabilitated. Surprisingly, he took nationalist positions close to those of Putin.

Nevertheless, the "Gulag Archipelago" represents perhaps the most valuable testimony of Stalin's repressions. The book is called by its author "an attempt at artistic research". It is primarily documentary and based on the testimonies of over 227 people who survived the hell of the Gulag - the Soviet camp system.

Instead of Solzhenitsyn's masterpiece, patriotic works such as "Young Guard" by Alexander Fadeev and "Hot Snow" by Yuri Bondarev can be returned to school programs, Vyatkin believes.

The chairman of the lower house of the Russian parliament, Vyacheslav Volodin, warned of a global catastrophe due to the supply of new weapons to Ukraine.

"If Washington and NATO countries deliver weapons that will be used to attack peaceful cities and attempt to seize our territories, (as they threaten), this will lead to retaliatory measures with the use of more powerful weapons," wrote on his Telegram channel, the chairman of the Russian State Duma. Vyacheslav Volodin accussing Washington and Brussels of leading the world to a terrible war with their decisions.

Crimea is Ukrainian, President Volodymyr Zelensky emphasized in a speech on Unity Day. For Ukrainians, all settlements in the country are already native, fighters from Izyum and Kupiansk are fighting for Bakhmut and Soledar, he noted:

"All together defend Kyiv and Kharkiv, all together liberate Kherson. And all of us, wherever we were born and raised, say today: I defend my Ukraine, my Donbas, and of course, my Crimea".

Kyiv informed that another British Sea King helicopter had been received. In November, London announced the dispatch of three such machines, one of which was already in Ukraine.

The German Minister of Defense Boris Pistorius emphasized that on the issue of tanks for Ukraine, Berlin conducts an intensive dialogue with international partners, especially with Washington.