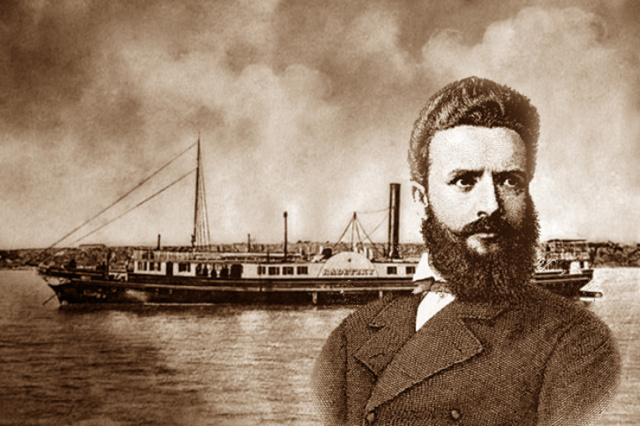 Botev and the "Radetzky" ship

The 175th anniversary of the birth of revolutionary poet Hristo Botev will be celebrated on January 6 across the country with rituals with the participation of representative units from the Ground Forces, the Air Force, the Navy, the Joint Special Operations Command, and the National Guard.

One of the greatest Bulgarian poets and revolutionaries - Hristo Botev, was born on January 6, 1848 in Kalofer. Botev lived only 28 years, but he remains in the national memory both with his creativity and his revolutionary work.

He was born on December 25, 1847 (new style - January 6, 1848) in the town of Kalofer in the family of the teacher Botyo Petkov and Ivanka Boteva. Initially (1854-1858) he studied in Karlovo, where Botyo Petkov was a teacher, later he returned to Kalofer, continued his studies under the guidance of his father and in 1863 graduated from the Kalofer school. In October of the same year, he left for Russia and enrolled as a private student at the Second Odesa High School, from which he was expelled in 1865. For some time he was a teacher in the Bessarabian village of Zadunaevka.

In 1867, he returned to Kalofer, began to preach a rebellion against wealthy Bulgarians and Turks, after which he finally left Kalofer. At that time, the first poem of Botev. was published in the newspaper "Gaida", edited by P.R. Slaveikov. Botev - "Maitse si". From October 1867 he lived in Romania. He worked in Braila as a typesetter under Dimitar Panichkov, where "Danube Dawn" was printed. In the following years, he moved from city to city, for some time he lived together with Levski.

In 1872, he was arrested for conspiratorial revolutionary activity and sent to the Focscani prison, but released due to the involment of Levski and Karavelov. He began working as a printer for Karavelov, and later as an associate and co-editor of the revolutionary organ. He began his active work as a journalist and under his editorship the new organ of the revolutionary party began to appear – in the paper "Zname". In 1875, together with Stefan Stambolov, he published the collection of poems "Songs and Poems". The April uprising prompted him to create a revolutionary group, of which he became voivode (leader). From Gyurgevo, he boarded the ship "Radetzky" with part of the crew and on May 17 they forced the captain to stop on the Bulgarian coast. On May 20, 1876, the last heavy battle took place - in the evening after the battle, a bullet pierced Botev.

On the occasion of the anniversary, the Municipality of Stara Zagora and the Stara Zagora Military Garrison organize a solemn city-wide ritual for laying wreaths and flowers in front of the bust-monuments of Hristo Botev and Hadji Dimitar in Metropolitan Metodiy Kusev Park. The beginning of the celebration is at 11.00 a.m. The presenter of the event will be the actress Svetla Todorova, director of the Drama Theater "Geo Milev". The Military Brass Band and a standard band and an honorary company from the Second Tundzha Mechanized Brigade will also take part in the ritual.

In connection with the anniversary of the poet's birth, the Bulgarian National Bank released a silver commemorative coin on the theme "175 years since the birth of Hristo Botev" from the "Bulgarian Revival" series.