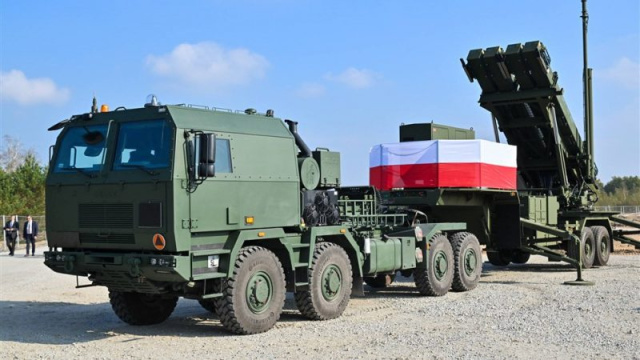 Poland's Defense Minister Mariusz Blaszczak said today that the EU member state will accept “Patriot” missiles from Germany, after earlier calling on Berlin to send them to Ukraine instead.

"After a conversation with the German defense minister, I am disappointed to accept the decision to withhold support for Ukraine," Blaszczak wrote on Twitter.

Germany has offered to deploy the advanced US-made Patriot system to Poland after a deadly blast believed to be from a stray Ukrainian air defense missile hit a Polish village last month.

But Polish officials have asked Berlin to instead send the system to Ukraine to help Kyiv defend itself against Russian missile barrages pounding the country.

Germany then responded that it would have to discuss with NATO any proposal to send the Patriot system to Ukraine, as it is part of the alliance's integrated defense.

NATO chief Jens Stoltenberg later said that Germany must decide for itself whether it wants to supply Ukraine with Patriot anti-missile systems.

NATO allies have already provided Ukraine with billions of dollars worth of weapons to help it fight back against the Russian invasion, including advanced air defense systems.

Germany provided Kyiv with the medium-range Iris-T system as part of Western efforts to bolster Ukraine's defenses against Russian strikes.

But the United States and other NATO allies have refrained from sending the long-range Patriot system to Ukraine.

The US system is a key part of the alliance's air defenses on its eastern flank.

Washington has already deployed Patriot missiles in Poland and Germany deployed them in Slovakia.