Russia again Hit with Missiles many regions of Ukraine 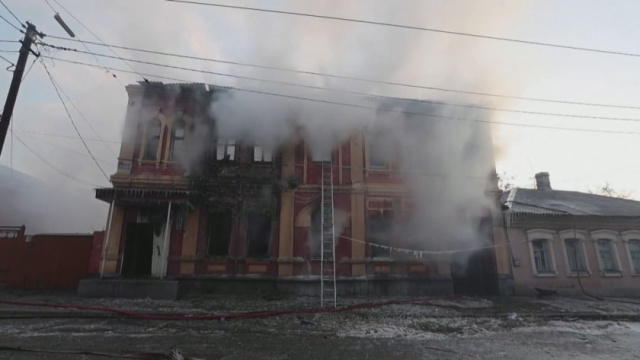 There were explosions at Engels Air Base, located in the Saratov region, and Diaghilev, near the city of Ryazan, and at least three aircraft, two of which are believed to be Tu-95 strategic bombers, are believed to have been damaged. It is these machines that launch cruise missiles at Ukraine's energy infrastructure.

The Russian response was not late. Within an hour - from 12:40 p.m. to 13:40 p.m. - an air threat alert was signaled in all regions of Ukraine except Crimea.

Air defenses are already operational in several areas. The media reported explosions in Cherkasy and Odesa, but there is still no confirmation of the information.

Explosions in the Kyiv region

Around 2:36 p.m., the head of the Kyiv Military Administration, Oleksiy Kuleba, confirmed that air defense forces were operating in the region.

"Stay in hiding and in safe places. Missiles are flying towards the region," he warned.

"Some of them are enemy missile strikes in the suburbs. Another part is due to the successful work of the air defense forces. We thank our soldiers for protecting us!" he wrote, warning of possible repeat attacks.

President Zelensky's office announced that the village of Novosofievka in the Zaporizhzhia region was damaged. There, several private houses were destroyed and there were injured civilians.

Around 2:00 p.m., military correspondent Andriy Tsaplienko reported that there were already downed missiles by the Ukrainian Air Defense Forces - 4 in Kharkiv Oblast, one each in Poltava and Dnipropetrovsk Oblasts. The air defense operation in the Poltava region has already been confirmed by the head of the local military administration, Dmitry Lunin.

He stressed the importance of not leaving cover as several new waves of enemy missiles were expected.

On the eve of the first reports of shelling, the head of the Cherkasy Military Administration, Igor Taburets, announced that, by order of Ukrenergo, special schedules for emergency power cuts were introduced in the region due to possible missile attacks on energy facilities in the country. Leaders of other regions also warned of possible power outages.

At 1:24 p.m., the head of the Odesa Military District Maxim Marchenko reported that the Russians were shelling the area with rockets. Sergei Borzov, head of Vinnytsia, warned that "there are many missiles in the sky over Ukraine". The office of the president also called for safety not to be neglected and for people to use the shelters. The head of the administration in Nikolaev Vitaly Kim also reported the launch of cruise missiles.

Ukrainian Air Force spokesman Yuriy Ignat said during a television marathon that Russian strategic bombers had taken off. He also warned that the occupiers could launch missiles in several waves in order to confuse Ukrainian air defenses.

"Traditionally, they launch from there. Strategic aviation is in the Volgodonsk region, also in the Caspian and Black Seas, and the ships of the Black Sea Fleet, according to preliminary information, have also been launched. The first wave of missiles has already gone out, there may be a few more. As a rule, they can use several waves of attacks to scatter missiles all over Ukraine and confuse our air defenses," Ignat said.

Read more from the 285th day of the war in Ukraine.