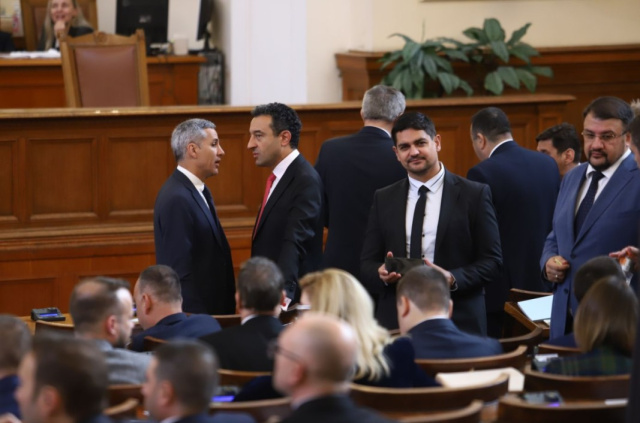 After three days of arguments and accusations of midnight manipulation, MPs have finally managed to form some of their standing committees to finally start the real work of considering and voting on bills. The commissions on agriculture, sports and religious denominations remained without chairpersons, and two others - without composition.

Chairing positions in the committees were distributed proportionally according to the size of the parliamentary groups. Thus, GERB headed seven committees, "We Continue the Change" - five, DPS - four, "Vazrazhdane" - three, BSP - three, "Democratic Bulgaria" - two, and "Bulgarian Rise" - one.

The bone of contention: Sport and Agriculture

The most disputed was the chairman's place in the sports commission, which temporarily remained without a chairman. Claims to him were made by "We Continue the Change" and DPS. At the beginning of the meeting, the chairman of the "We Continue the Change" parliamentary group, Andrey Gyurov, announced that initially there was an agreement that the formation of Kiril Petkov and Asen Vassilev would receive the chairman's place in it, but late in the evening they were informed that the committee was redirected to the DPS. Gyurov noted that this did not happen at the presidential council and asked who orders the committees in the National Assembly. From the party of Petkov and Vassilev, there were accusations of external interference because of the conflict between the acting Minister of Sports, Vesela Lecheva, and her predecessor, Radostin Vasilev, who was nominated by "We Continue the Change" for chairman.

The DPS, for its part, proposed Halil Letifov as the chairman of the commission, and in the end both candidacies were voted on in the plenary hall. A parity of the majorities was reached, as in the voting for the Speaker of the National Assembly, and neither of the two candidates gathered a majority. Vassilev was supported by "We Continue the Change", BSP and "Democratic Bulgaria", and Letifov - by GERB and DPS. "Bulgarian Rise" again voted "abstain" for both nominations. After that, the party decided to propose its own candidate for the chairmanship - the former minister of sports, Prof. Daniela Dasheva. Desislava Atanasova from GERB objected that, in order not to violate proportionality, it is better to discuss this matter in advance at a presidential council, and thus the commission was left without a chairman.

A similar fate befell the Committee on Human Rights and Religions, which was also left without a chairperson as no parliamentary group made a nomination. According to preliminary information of "Dnevnik" media, the leadership of the commission was entrusted to DPS, but since the movement joined the race for the headship of the sports commission, it did not issue a nomination for this one.

Another interesting scenario played out during the selection of the composition of the Committee on Agriculture. It was supposed to be headed by the former Deputy Minister of Agriculture Ivan Hristanov from "We Continue the Change", whose candidacy was rejected after, on the proposal of GERB, the composition and the chairman of the commission were voted separately.

Toma Bikov's proposal for a split vote was supported by the votes of DPS, BSP and "Bulgarian Rise".

In the end, on the proposal of the temporary chairman of the meeting, Yordan Tsonev from the DPS, the new procedure for electing a chairman was postponed until the next meeting (on Friday, October 28), when the composition of the other committees will also be filled.

Among them are also those on legal and constitutional issues, the composition of which can be chosen only after the decision to split the commission into two separate ones is published in the State Gazette.

In the previous parliament, a temporary commission for changes to the Constitution was created at the proposal of "Democratic Bulgaria", but the then opposition GERB, DPS and "Vazrazhdane" boycotted it by refusing to nominate their candidates. Therefore, even before the voting of the draft decision, the former Deputy Speaker of the Parliament Miroslav Ivanov ("We Continue the Change") asked the representatives of GERB whether this time they will enter the commission on constitutional issues, but his inquiry remained unanswered.

Who are the committees and their chairpersons

One of the most important committees in the parliament - the budget and finance committee - was appointed on Wednesday (October 26). Then the deputies decided that it should be led by the former finance minister in the Oresharski cabinet, Petar Chobanov from the DPS. His deputies will be Venko Sabrutev from "We Continue the Change", Vladislav Panev from "Democratic Bulgaria", Kiril Ananiev from GERB-SDS and Rumen Gechev from BSP.

The party of former Prime Minister Boyko Borissov will head the other important committee - the one on legal issues. It is this committee that is in charge of bills in the field of justice, as well as changes to the Electoral Code. It was decided that its chairman will be the lawyer Radomir Cholakov, but this will be voted on after the decision to split the commission into two is published in the State Gazette.

The Energy Committee was headed by former Energy Minister Delyan Dobrev, and his deputies will be Radoslav Ribarski from "We Continue the Change", Ramadan Atalai from DPS, Dragomir Stoynev from BSP and Ivaylo Mirchev from "Democratic Bulgaria". The Foreign Policy Committee will be chaired by Ekaterina Zaharieva, her deputies will be  Ventsislava Ljubenova from "We Continue the Change", Angel Georgiev from "Vazrazhdane", Deyan Dechev from "BSP for Bulgaria" and Violeta Komitova from "Bulgarian RIse". The one on defense will be led by Hristo Gadjev, and the one on education and science by the former minister of education in the "Borissov" cabinet, Krasimir Valchev. The Commission for the direct participation of citizens and interaction with civil society was headed by Anna Alexandrova.

The commission for control over the security services, which is led on a rotating basis, will first be headed by Daniel Mitov from GERB. The other rotating chairmen are former interior minister Boyko Rashkov from "We Continue the Change", Ahmed Ahmedov from DPS, Atanas Zafirov from BSP and Atanas Atanasov from "Democratic Bulgaria".

In addition to the budget committee, DPS also gets the chairmanships in the committees on internal security, environment and human rights and religions. They will be headed by Hamid Hamid and Stanislav Anastasov, respectively.

The second largest parliamentary group ("We Continue the Change") will have the European Union, Health, e-Government and Agriculture committees. The first will be headed by Denitsa Simeonova. The e-governance committee will be headed by the former deputy prime minister for effective management in the "Petkov" cabinet, Kalina Konstantinova, and the one on health care by surgeon-oncologist Anton Tonev.

The Socialists, on the other hand, received the commissions for social and demographic issues, transport and culture and media. The former social minister in the "Petkov" cabinet, Georgi Gyokov, was elected chairman of the first, and Georgi Svilenski was elected for transport. Ivan Chenchev headed the media commission.

"Democratic Bulgaria" received the commissions on constitutional and economic issues. Martin Dimitrov was appointed chairman of the economic committee. The Constitutional Commission will in all probability be headed by Atanas Slavov.

The smallest parliamentary group - "Bulgarian Rise" will chair only one committee - the one on corruption prevention. They will be headed by the leader of the party and former acting prime minister Stefan Yanev.