Meloni: Italy will not be the Weak Link of the West 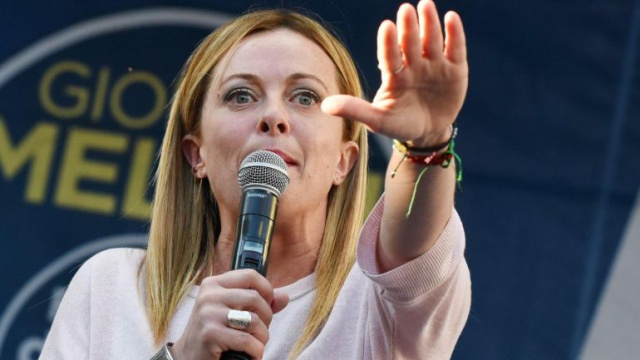 Giorgia Meloni, who is expected to become the new prime minister of Italy, said that her government will be pro-NATO and pro-European, "Reuters" reported.

"With us in power, Italy will never be the weak link of the West," Meloni declared, adding that any party that disagreed with this line was free not to enter the government.

The uncompromising statement came after a leaked recording of her conservative bloc ally Silvio Berlusconi was heard accusing Ukrainian President Volodymyr Zelensky of sparking the war with Russia.

Berlusconi, 86, is a longtime friend of Putin, and the tape of his speech was leaked after a series of similar statements by him in recent months in which he backed Moscow's line on the invasion of Ukraine and criticized the West's response.

Meloni, who could be given a mandate to form a government as early as the end of this week, has repeatedly pledged to support Ukraine and Western sanctions against Russia.

"There is one issue on which I have always been extremely clear and will continue to be so. I intend to lead a government that will have a clear and unambiguous foreign policy," she said. "Anyone who disagrees with this basic position is free not to participate in government."

"Reuters" notes that with her speech, Meloni threw down the gauntlet to her potential coalition partners in the right-wing bloc.

Consultations with the representatives of the parties represented in the parliament for the formation of a government begin today under President Sergio Mattarella. They will last two days.

In Italy, the president is required by the constitution to invite the leaders of all the main political parties to talks before giving the mandate to form a cabinet.

Salvini said earlier yesterday that he expected the new government to be sworn in sometime between Saturday and Monday and officially take office on October 26 after receiving the mandatory vote of confidence from parliament.

In the September 25 election, Meloni's "Brothers of Italy" won the most votes of the right-wing bloc parties, meaning she should be given the mandate to form a government.

But despite the comfortable majority the conservatives won, behind-the-scenes negotiations to form a government proved more difficult than expected, largely because of Berlusconi's displeasure with Meloni's refusal to hand over key ministerial posts to his party.

Mattarella's office specified that today the president will talk with the opposition parties, and on Friday morning he will also meet with the leaders of the formations from the conservative bloc.