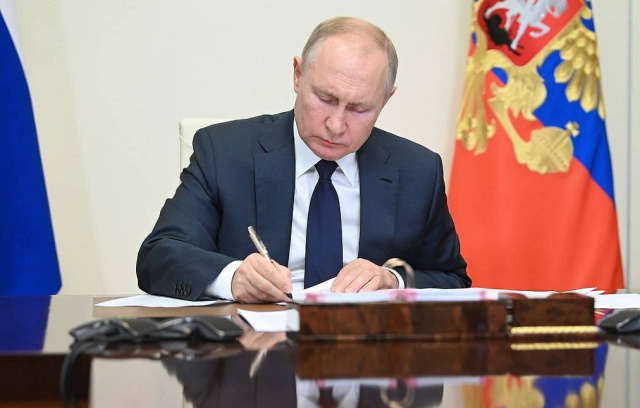 Earlier this week, both houses of the Russian parliament ratified the treaties to incorporate the four regions into Russia. The contracts were signed in Moscow on September 30.

The signing of the legislation completed the annexation of the four regions under Russian law. However, Ukraine opposes the annexation, condemned by much of the international community as an illegal act. The annexation issue is scheduled to be discussed at the UN Security Council on Monday.

According to the new laws, the residents of the four regions are recognized as Russian citizens from September 30 - the date of the inclusion of the territories into Russia. Those who want to renounce Russian citizenship have one month to submit applications.

The DPR and LPR will retain their previous names and will be republics within the Russian Federation, and the state language will be Russian. Zaporizhzhia and Kherson regions will retain their status as regions.

The boundaries of the new subjects, as provided for in the treaties signed on September 30, will be determined based on the boundaries that "existed on the day of their formation and adoption in the Russian Federation."

"The territory of the DPR and LPR is determined by the borders of 2014 established in their constitutions. Zaporizhzhia is part of the Russian Federation within its administrative boundaries, and Kherson Oblast - with two regions of Mykolaiv Oblast," explained the head of the State Construction Committee and legislation of the State Duma Pavel Krasheninnikov, quoted by TASS.

This means that Russia considers as its territories those parts of the annexed regions that are now under Ukrainian control.

"Read the decree. There is legal wording there. In general, of course, it is about the territory on which the military-civilian administration operated at the time of adoption (within Russia). But I repeat once again: some territories there will be returned and we will continue to consult with the population that expresses a desire to live in Russia."

This is the map published by RIA Novosti:

Annals of Russia not knowing its own borders: this map from state news agency Ria Novosti marks entire swathes of Ukraine that Russia has never occupied *or even formally claimed* as Russian territory pic.twitter.com/BiypZkmrJ0

Marked as Russian territory are lands that have not only never been occupied - the Kremlin has never laid claim to them.

Until their leaders are elected, the new regions under Russian law will be governed by caretakers appointed by Putin. Elections for regional legislative assemblies should be held in September next year.

For the integration of the four regions, it is planned to have a transition period that will last until 2026. Until 2023, the hryvnia can be used in them, and then the ruble will become the sole currency.

It is expected that the armed forces of the new regions (as there are in the DPR and LPR) will be included in the composition of the Russian forces, and legislative norms that contradict the constitution of Russia, including the death penalty, will not be applied.