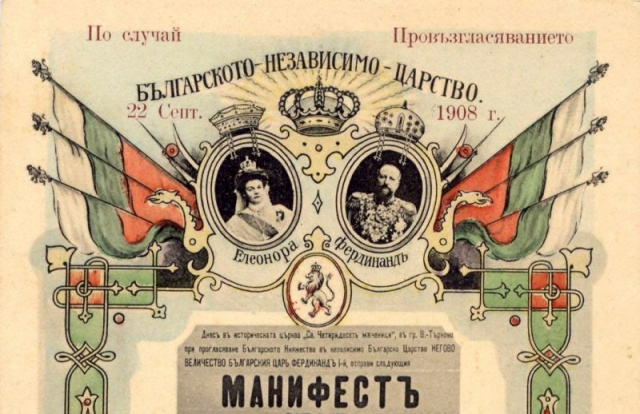 Bulgarians celebrate 114 years since the declaration of the Independence of Bulgaria. The day has been celebrated as an official holiday of the country since 1990.

On September 22 (October 5, old style) in 1908 in Veliko Tarnovo, with a manifesto of Knyaz Ferdinand I, the Independence of Bulgaria was declared.

It was recognized by the Ottoman Empire and the Great Powers in the spring of 1909. The holiday is celebrated with a fireworks show in the Old Capital, where the independence was proclaimed on this day in 1908 in the Church of the Forty Martyrs.

The place was chosen specifically to emphasize the continuity with the medieval Bulgarian state. Bulgaria is declared a kingdom, and Ferdinand accepts the title "Tsar of the Bulgarians".

Today, Veliko Tarnovo is the center of celebrations for the 114th anniversary of the declaration of the Independence of Bulgaria, announced in Tsarevets fortress. Vice President Iliana Yotova will participate in the celebrations in the old capital city this morning, and in the evening, acting Prime Minister Galab Donev will take part in the fireworks show.

The festive events begin with a solemn liturgy in the "St. 40 Martyrs" church. “Independence is a huge and significant holiday because Bulgaria preserved its dignity,” Metropolitan Grigory of Veliko Tarnovo pointed out:

In the Tsarevets fortress, from 10.30 a.m., there will be the military ritual of raising the national flag.

A festive procession led by military bands will cover the road from Tsarevets to the Mother Bulgaria monument.

Historians, politicians, constitutionalists and experts on immovable cultural heritage gather for the conference "Veliko Tarnovo - historical and spiritual capital of Bulgaria - legal status and perspectives". The purpose of the discussion is to discuss the status that Veliko Tarnovo received from the parliament in 2019, Deputy Mayor Neiko Genchev pointed out:

"To see what the existing situation is, what can be done with the existing legislation and what are the possible solutions and possible obstacles".

The culmination of the celebrations for the 114th anniversary of the declaration of the Independence of Bulgaria is this evening with a firework show at "Tsar Asen Parvi" square at 7:30 p.m.

Independence Day celebrations will be held across the country.

In Plovdiv, Ruse, Vratsa, Yambol and other cities of the country, the national flag will be raised with military rituals and prayers for prosperity will be offered.

In Plovdiv, the holiday will be celebrated with a solemn ceremony on "September 22" square. Before that, the "Petko Karavelov Center" Association invites the people of Plovdiv to attend the prayer for the health and well-being of the entire Bulgarian people in the "St. Nedelya" church. Wreaths and flowers will be placed in front of the memorial plaque of Alexander Malinov.

The Declaration of Independence of our country will be solemnly celebrated in Yambol as well. The official program includes a military ritual, thematic documentary exhibitions and a bike ride to the Kabile Archaeological Reserve.

The festive day will begin with the performances of the city brass band and the celebration of a thanksgiving prayer, in which representative military companies from the Yambol garrison will also take part.

The bike ride under the motto "Independence" will start at 11:00 a.m. from the square in front of the municipality building. The final point of the cyclists is the Archaeological Reserve "Thracian and Ancient City of Kabyle".

The "Bezistena" cultural and information center will present two guest exhibitions with materials from the funds of the Central State Archive, entitled "Bulgarian Independence" and "The Age of Ferdinand I".

An open day has been announced at the Regional History Museum, as well as at the Municipal Museum of Battle Glory.

With a traditional official ritual, the 114th anniversary of the declaration of the Independence of Bulgaria will be celebrated in Pleven. The ritual begins at 11:00 a.m. in front of the memorial plaque opposite the entrance to the "Ivan Radoev" DKT on "Stefan Stambolov" Square. The Mayor of Pleven Municipality Georg Spartanski will deliver a speech.

Wreaths and flowers will be presented as a token of appreciation. The Municipal Choir "Gena Dimitrova" with conductor Anelia Decheva and the Municipal Wind Orchestra with conductor Plamen Markov will participate in the celebration with performances.

The Bulgarian National Radio collected the moods of the Bulgarians for today:

- “We appear on the world map after September 22. Whether in our heads and our psyche is dependent or independent is a separate matter, but we are an independent country from that date.

- It fills me absolutely with joy, with pride, mixed feelings. A little feeling of sadness for the simple reason that we are a small country, and a small country is always dependent on someone, but this does not prevent us from fighting for our independence, at least to try to have it.

- This is one of the most significant holidays in the country, and that is why it is important to be together on this day, to have a desire to be together because our desire is increasingly decreasing.

- Always proudly the flag of independence. Bulgaria has been in much more difficult times than these, but our people are smart, our people are wise and have always come out of difficult situations.”