Nearly 100 Deaths from the Clashes between Azerbaijan and Armenia 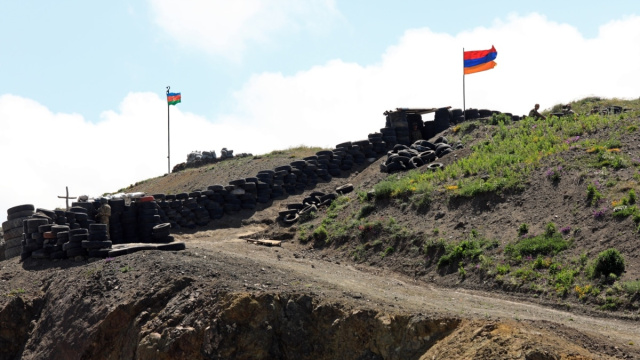 Armenia and Azerbaijan reported nearly 100 military deaths on Tuesday in the worst fighting since the 2020 war over the disputed Nagorno-Karabakh region, AFP reported.

The previous wave of fighting over the Armenian-populated enclave ended with a fragile truce brokered by Russia.

But yesterday, the Ministry of Defense in Baku announced that "50 Azerbaijani military personnel died as a result of a large-scale provocation provoked by Armenia." Shortly before that, Yerevan reported the death of at least 49 of its soldiers.

Azerbaijan accused Armenia of violating the ceasefire after a night of clashes that renewed fears of another full-scale conflict between the historic foes.

Russia announced that a truce had been reached between the warring parties, leading to relative calm, but Azerbaijan later accused Armenian forces of "intensely" violating the agreement.

Armenia appealed to world leaders for help after fresh fighting broke out, accusing Azerbaijan of trying to enter and advance on its territory.

US Secretary of State Antony Blinken yesterday called on the leaders of Azerbaijan and Armenia to reach a peaceful solution and warned that the US would "press for an immediate cessation of hostilities and a peace agreement between Armenia and Azerbaijan".

Russian media reported that last night about a hundred people gathered at a protest in Yerevan demanding the resignation of Prime Minister Nikol Pashinyan due to the escalation of tensions.