Bulgaria’s President: We will Sign Important Partnership Agreements with the UAE 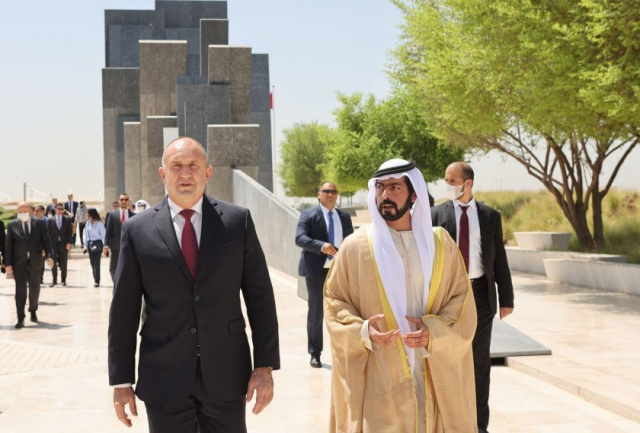 President Rumen Radev met today with the President of the United Arab Emirates. A memorandum of strategic partnership between the two countries is about to be signed.

"The very fact of the invitation for this visit is eloquent enough and it shows that since there is a desire to restore the dialogue at the highest political level, this is an indicator of the increased trust in Bulgaria and interest in the growing economic opportunities of our country. Of course, I am sure that the meeting with the president gives an additional impetus to the development of the partnership in many and important areas," Radev told BNT during his visit.

The President stated that a strategic partnership memorandum will be signed between the two countries, which will open up the prospect of transforming political will into new opportunities for cooperation and partnership in the following areas: economy, investments, energy, trade, digital and green technologies, urban planning. An important agreement is also signed in the fields of education, science and culture, agriculture, information exchange and defense industry.

"Bulgaria should not limit its ambition to the search for new investments. On the contrary - we are here in search of new partnerships. Bulgaria offers a huge potential in terms of economy, science, education and above all the talent of our young people, so that we mutually build this mutually beneficial cooperation," said Radev.

He stated that in this respect the caretaker government is laying an extremely good foundation and hopes that the following governments will quickly build on what has been achieved so far.

"Bulgaria can be not only a good economic partner but also a serious factor in building a more solid relationship between the countries of the Gulf and the EU because it not only has a strategic position but has accumulated great political, economic and scientific potential", added the president.

He said that the options for energy diversification - importing natural gas and oil from the UAE - are being considered, but this does not exhaust the potential of our partnership.

"With high technologies, scientific potential and natural resources, we can produce the fuel of the future - green hydrogen, and in large quantities, and export it. From a transit country, we can become a country that produces and exports energy resources of the future. This is a big goal and here there are representatives of the Bulgarian business and scientific circles who have been working in this field for a long time and have technological solutions at a very good cost price," said Radev.

According to him, the concrete exchange of information started during the business forum and the political visit at the highest level aims to give perspective to this partnership.