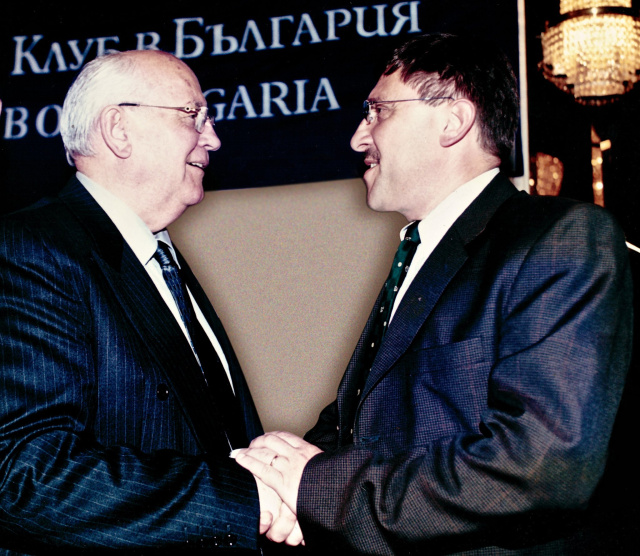 The executive director of M3 Communications Group, Inc. and lead PR expert Maxim Behar tells about his meeting with the politician, who changed the course of history - Mikhail Gorbachev.

No one in the world, not even the best Soviet experts, expected a politician who would change the world in just a few days.

... It was a little bit after midnight. I was already falling asleep after a glass or two of wine when the only then National Television interrupted its program to broadcast a live event from Reykjavik. A press conference of the then almost newly elected Soviet leader Mikhail Gorbachev and the experienced American President George Bush ... It was around four years

before communism collapsed in Bulgaria

and no one believed yet that this insane saga would end. I was watching Gorbachev at that late hour and even if I had been drifting asleep because of the wine, I became wide awake in seconds. I really didn't believe what I was hearing, but my whole skin perceived only one message from his words - we will never continue to live like this again...

So many books have been written about Mikhail Gorbachev and so many films have been made that probably whatever someone writes, will be repeated... But

every single repetition will be proof

of the indisputable truth that this very man changed history in a very human manner and gave a breath of air to both the East and the West. They turned that very breath into infinite freedom.

“Don't tell me I started a revolution. You did it, all of you. My role was only to listen to you, or rather to hear you…”

Many years after that historic meeting in Reykjavík, Mikhail Gorbachev had leaned close to me to answer my questions. The lobby bar of the Sheraton Hotel was packed with people, at least half of whom have come just to catch a glimpse of him, in case there isn’t any room for them left.

The Atlantic Club, as usual, has invited around two thousand people in the hall,

which had two hundred seats…

I asked him where he found the courage to change so drastically the course of this gigantic Soviet authoritarian machine, which seemed eternal even to the most professional analysts.

"Well, no courage was needed. It was clear that it could no longer continue like this. The world was different, the people were different... Well, we were all different and we wanted a more normal world with a human face..."

I interrupt him with a rather surprised face while holding my pen in my hand... “Human face!

Isn't that what the Czechs and Slovaks wanted

in that distant 1968, when their demands were suppressed by Soviet tanks and the Socialism with its inhuman face returned to the countries for a long time...”

“This is different”, Gorbachev tells me. “Those were different times, of course it was a mistake, but it was also caused by the regime back then. Now we all want to breathe easy and create a new world. That's why I did what I just had to do... I know, many people now claim that I destroyed the Soviet Union, but that's not true, it collapsed on its own. The system collapsed on its own because it was built on a weak foundation.”

We talked for almost an hour, and I was amazed by the smoothness, confidence and calmness the man opposite of me spoke with. He sipped his tea lightly and casually, at the same time looking you straight in the eyes, but not missing anyone who passed by and looked at him in amazement.

Gorbachev! Is that him?

The real one, the original, not a look-alike brought in from Madame Tussauds’ Museum just to be shown at the Sheraton Hotel and then taken back.

He really did things that seemed impossible in any human life.

“Was there something specific, or a tactic, or a strategy or a great secret plan…”, I asked him, and I knew that

this answer will turn the whole conversation around.

“Naturally”, answered Gorbachev quite seriously. “I had to eliminate all these people who wanted the totalitarian government to stay and everything to continue as before. And not only in the Soviet Union, but even the Eastern satellites. I'm not sure it was a tactic, as you call it,

but let's leave that definition then…

It's yours. The important thing is that we succeeded. And hopefully it was for good.”

Now, in the year 2022, apparently, we are all confused. Why did the war against Ukraine happen, where did Gorbachev's messages remain, who didn't learn their lesson, who didn't respect history properly...? In fact, it is exactly history that will evaluate what is happening, and we already know the results.

“The important thing is that we do what will be good for our children”, said Mikhail Gorbachev at the end and somehow shot the question: “And do you have children?”

“My son's name is Michael, he was born just at the time when the whole world admired you and his name was chosen not without your influence...”

Gorbachev, or Gorby, as the whole world called him, slowly stood up and whispered amazed: "Respect! Thank you!”

And in fact, it is me, it is us, it is the world, that must say these words to him.

Because of all his  “grips” and because of these at least thirty years of peace!