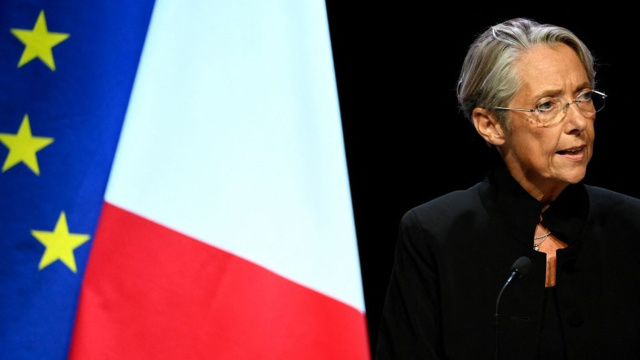 French Prime Minister Elisabeth Borne has warned company bosses of the risk of curbing energy use this winter and urged them to take measures to reduce consumption.

"If we act collectively then we can overcome the risk of shortages but if everyone doesn't take part and if all the bad scenarios come together, then we may be forced to impose cuts on consumers," she told the business group Medef.

"If rationing ends up happening, businesses will be the most affected and unfortunately we have to be prepared for that," she continued.

Borne said the government was already drawing up contingency plans, including an "allowance trading system" that would allow companies to buy and sell electricity allowances.

The government is also preparing measures to help companies that will be "too seriously affected" by rationing, AFP reported.

The clear warning about the risk of power shortages further underscores the government's efforts to prepare public opinion and businesses for the looming difficulties caused by the ongoing war in Ukraine.

In a speech last week at the first cabinet meeting since the summer break in August, President Emmanuel Macron warned that France may have to make "sacrifices" due to what he called "the end of plenty".

"Every company needs to mobilize and act. I urge everyone to draw up their own energy saving plans in September," Borne continued while stressing that the crisis will help the transition away from fossil fuels.

"The coming months are just a step in the larger transition we have to make," she said.

France is more protected than many European countries from a spike in gas prices caused by Russia's decision to cut exports to Europe after its invasion of Ukraine in February.

France generates about 70% of its electricity using 56 nuclear reactors, but 32 of them are currently shut down either for routine maintenance or to assess corrosion risks.

Borne said "restarting the shut down reactors is essential to avoid power outages".

Macron struck a more upbeat tone during his visit to Algeria last week, where additional supplies from the North African producer were discussed.

"We won't have any problems because we depend very little on gas," Macron told reporters in Algeria on Friday. "We have one gas pipeline with Norway. We have increased the volume and diversified things".

He pointed to the new terminal capable of processing liquefied natural gas (LNG) in the northern port of Havre, as well as efforts to replenish French gas reserves, which are 90% full.

"So from a purely French point of view this winter, things will be fine. It's a European issue," Macron explained, saying "solidarity" may be needed to help EU colleagues who are more dependent on Russian gas.

Gas makes up about 20% of France's total energy consumption, but is used as an energy source for less than 10% of electricity, International Energy Agency statistics show.