Bulgaria Commemorates 145 Years since the Epic Battles at Shipka Pass 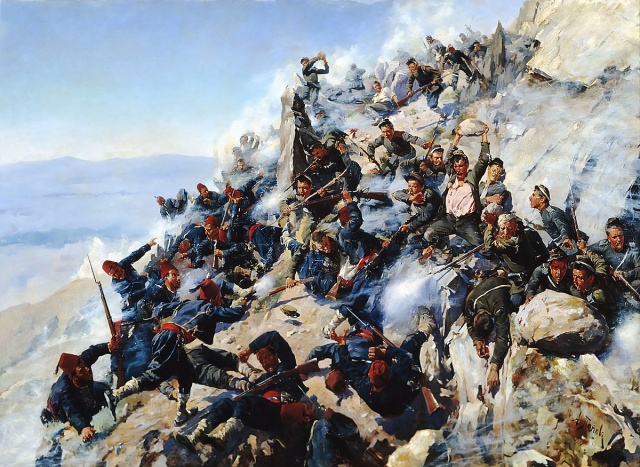 The epic battles were fought at the highest points of the Shipchen Pass - St. Nicholas Peak (today Stoletov Peak), Shipka Peak and Orlovo Gnezdo from August 21 to 23, 1877 between Suleiman Pasha's troops and the Russian-Bulgarian detachment of Gen. N. G. Stoletov.

The celebrations are held under the patronage of the head of state Rumen Radev.

They will be attended by Vice President Iliana Yotova, who will climb Mount Shipka on Saturday.

The Minister of Defense Dimitar Stoyanov will also honor the memory of those who died for the liberation and national unification of Bulgaria, Deputy Chief of Defense Lieutenant General Tsanko Stoykov will also be present.

Wreaths and flowers will be presented at the historic Shipka peak at a solemn ceremony at 11.30 a.m. The Minister of Defense will open the photo documentary exhibition "Classes of Freedom - Shipchenski, Orlovski, Buzludzhanski, Sheinovski, Opalchenski...” For the first time, the national information campaign "Be a soldier" will be held at this place. It will present main military formations from the types of armed forces with a display of armaments and equipment and will provide up-to-date information for those interested in a military career.

From 8:00 p.m. the same evening in the "Saint Petka" temple-monument in the "Petrova Niva" area, Minister Dimitar Stoyanov will attend the funeral prayer for the fallen revolutionaries for 119 years since the Ilinden–Preobrazhenie Uprising (1903). During the solemn celebration (fireworks), he will assume the rank of honor and deliver a speech on the occasion of the anniversary.

The army puts another emphasis on Saturday, namely the "Be a soldier" campaign.

On August 20 at 10:00 a.m. in the large parking lot on Shipka Peak, all guests of the celebrations will be able to see the various structures of the Ministry of Defense and formations of the Bulgarian Army. The purpose of the event is to "bring out" the Bulgarian Army to the public, to orient young people to the military profession and to raise the authority of the armed forces. The campaign has the ambition to create positive attitudes among the public in areas where there are no traditional military formations and structures of the Ministry of Defense, to familiarize the citizens with the social status of the serviceman, as well as with the opportunities for personal and professional development in the Armed Forces of the Republic of Bulgaria. There will be a static and dynamic display of military equipment, equipment and equipment of the Ground Forces and Special Forces, tactics and procedures, demonstrations.