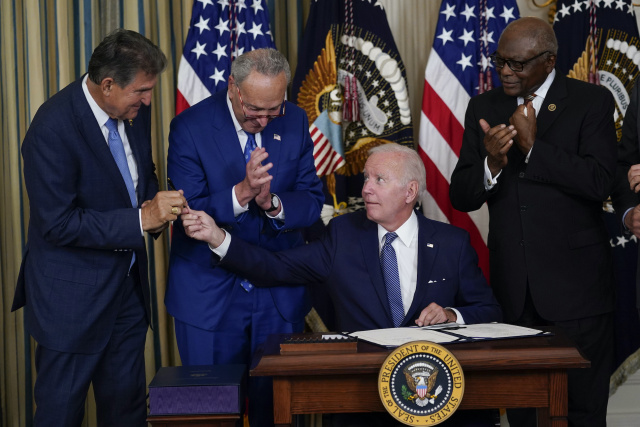 US President Joe Biden on Tuesday signed into law a sweeping bill to lower health care costs and address climate change, representing a key win for Democrats in Congress.

"The Inflation Reduction Act does so many things that for so many years so many of us have fought to make happen," Biden said during remarks at the White House prior to signing the bill. The legislation was passed by both the House and Senate along partisan lines. The USD 740 billion bill, which was significantly slimmed down from the original USD 3.5 trillion package, includes some of Biden's key campaign promises and makes the largest investment in federal climate programs in history, The Hill reported.

The White House says Biden's Inflation Reduction Act will reduce greenhouse gas emissions by about one billion tons in 2030. It says that this bill is ten times larger than any climate legislation ever enacted.

"The Inflation Reduction Act will lower costs for families, combat the climate crisis, reduce the deficit, and finally ask the largest corporations to pay their fair share," the White House said and added Biden and Congressional Democrats have worked together to deliver a historic legislative achievement that delivers for American families, and grows the economy.

"With unwavering conviction, commitment, and patience, progress does come," Biden said in the State Dining Room as he prepared to sign the legislation. "And when it does, like today, people's lives are made better and the future becomes brighter and a nation can be transformed."

According to Congressional Budget Office estimates, this bill will reduce the deficit by approximately USD 300 billion over the next decade, with the United States increasing savings and revenue by about USD 790 billion while spending roughly USD 485 billion. The USD 80 billion IRS expenditure is expected to net USD 124 billion of that revenue over 10 years.

Earlier, Republicans opposed the bill, citing concerns about strengthening the IRS and the bill's potential economic impacts. The IRS's increased enforcement and operations budget, including hiring new agents, could be used to increase audits of ordinary American families and small businesses, the lawmakers contended.

The bill also adds a 15 percent corporate minimum tax and closes the carried interest loophole. The Biden administration has vowed that the legislation will not violate the president's campaign promise not to raise federal taxes on any person making less than USD 400,000 a year.