China has begun "Strategic Exercises" with Live Firings around Taiwan 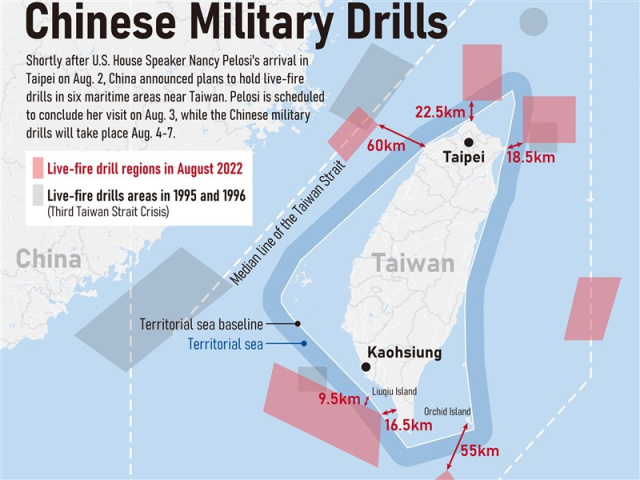 China's People's Liberation Army has begun military exercises involving live fire on the waters and in the airspace around the island of Taiwan, Chinese state television reported on Thursday.

"Precision long-range missile strikes" were carried out in the eastern part of the Taiwan Strait, China's Eastern Command said in a statement. Taiwan reported that several Chinese aircraft briefly crossed the dividing line in the strait.

The exercise, spread across six locations, is due to conclude at noon on Sunday. They followed US House Speaker Nancy Pelosi's visit to Taiwan, a trip condemned by Beijing, which claims the self-ruled island is part of Chinese territory.

Significantly, to the north, east and south, the exercise zones bisect territorial waters 12 nautical miles off the coast that Taiwan claims - something Taiwanese officials say is a challenge to international order and amounts to a blockade of its sea and airspace.

The sites are surrounding the island in an unprecedented formation, Meng Xiangqing, a professor at the National Defense University, told Chinese state television, describing how an actual military operation against Taiwan might play out. "In fact, it has created very good conditions for us as we reshape our strategic landscape in the future, favorable to our unification," he said.

Chinese forces in two areas off Taiwan's northern coast could potentially block the major port of Keelung, while strikes could be launched from an area east of Taiwan targeting two military bases in Hualien and Taitung, he said. The "gates" to Kaohsiung could also be closed by the Chinese military along the southwest coast, Meng described.

Taiwan's cabinet spokesman strongly condemned the drills and said the websites of the defense ministry, foreign ministry and presidential office had been attacked by hackers.

Unusually, the drills in six areas around Taiwan were announced with a location map released by the official Xinhua News Agency, a factor that some analysts and academics say indicates the need to play to both domestic and foreign audiences.