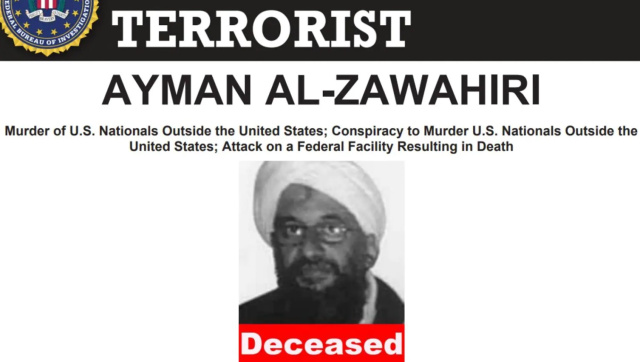 Al Qaeda chief Ayman al-Zawahiri was killed on Saturday in an air strike by the United States, US President Joe Biden confirmed on Monday (local time).

"On Saturday, at my direction, the United States successfully concluded an air strike in Kabul, Afghanistan and killed Al Qaeda Amir Ayman al-Zawahiri," Biden said in a media briefing. The US President said that justice has been delivered, adding, "No matter how long it takes, no matter where you hide, if you are a threat to our people, the US will find you and take you out."

"He carved a trail of murder and violence against American citizens, American service members, American diplomats, and American interests. Zawahri was Bin Laden's leader, his number two man, and his deputy during the time of terrorist attacks on 9/11. He was deeply involved in the planning of 9/11," Biden said.

"When I ended our military mission in Afghanistan almost a year ago, I made a decision that after 20 years of war, the United States no longer needed thousands of boots on the ground in Afghanistan to protect America from terrorists who seek to do us harm," Biden said, adding "I made a promise to the American people that we would continue to conduct effective counterterrorism operations in Afghanistan and beyond. We've done just that."

Reports surpassed on Monday that the US killed Zawahiri in Afghanistan in a drone strike. Following this, Taliban spokesman Zabiullah Mujahid confirmed the strike and said, "An air strike was carried out on a residential house in Sherpur area of Kabul city on July 31."

He said, "The nature of the incident was not apparent at first" but the security and intelligence services of the Islamic Emirate investigated the incident and "initial findings determined that the strike was carried out by an American drone."

Mujahid said the Islamic Emirate of Afghanistan "strongly condemns this attack on any pretext and calls it a clear violation of international principles and the Doha Agreement."

The US State Department had offered a reward of up to USD 25 million for information leading directly to Zawahiri's capture.

The Federal Bureau of Investigation (FBI) added a "deceased" caption under the profile image of Al Qaeda chief Ayman al-Zawahiri on its website, after the most wanted terrorist was killed by the US in an air strike in Kabul.

Zawahiri, an Egyptian surgeon was deeply involved in the planning of 9/11 and he also acted as Osama Bin Ladens personal physician.

Al-Qaeda, who had just turned 71, took over the leadership of Al-Qaeda after the US Forces hunted down Osama bin Laden in Jalalabad of Pakistan. 11 years after Laden was killed, Zawahiri had become an international symbol of the group, and a global terrorist with a reward of USD 25 million on his head.

In 1993, he took over the leadership of Islamic Jihad in Egypt and became a leading figure in a campaign in the mid-1990s to overthrow the government and set up a purist Islamic state. He was found to be involved in the killing of over 1,200 Egyptians.

Years later, Zawahiri became number two on the list of "most wanted terrorists" announced by the US government in 2001.

In 1998, Zawahiri finally merged the Egyptian Islamic Jihad with Al-Qaeda.

Zawahiri was indicted for his alleged role in the bombings of August 7, 1998, when nearly simultaneous bombs blew up in front of the American embassies in Nairobi, Kenya, and Dar es Salaam, Tanzania, in Africa - 224 people died in the blasts, including 12 Americans, and more than 4,500 people were wounded.

The culmination of Zawahiri's terror plotting came on September 11, 2001, when nearly 3,000 people were killed in the attacks on the twin towers of the World Trade Center and Pentagon. A fourth hijacked airliner, headed for Washington, crashed in a Pennsylvania field after passengers fought back.

al Zawahiri emerged as a prominent speaker of Al-Qaeda, in recent years after he appeared in 16 videos and audiotapes in 2007, four times as many as Bin Laden, as the group tried to radicalize and recruit Muslims around the world.

His whereabouts were a mystery for several years, but he was believed to be hiding along the border between Pakistan and Afghanistan.

In January 2006, the US had earlier tried to kill Zawahiri in a missile strike near Pakistan's border with Afghanistan. The attack killed four al-Qaeda members, but Zawahiri survived and appeared on video two weeks later, warning US President George W Bush that neither he nor "all the powers on earth" could bring his death "one second closer".

Zawahiri's targeted killing comes a year after the US military withdrawal from Afghanistan and the Taliban's takeover of the country.