Day 152 of the Invasion of Ukraine: Zelensky defined this week as Very Important for his Country 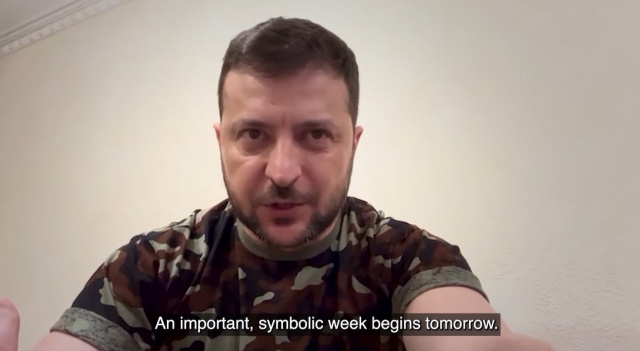 Russia earlier claimed responsibility for the missile attack on the port of Odessa as Ukraine prepares to celebrate its national holiday - Ukrainian Statehood Day - on July 28 this week.

In Cairo, Russian Foreign Minister Sergey Lavrov said the food problems began before the war in Ukraine due to the pandemic and problems in supply chains. After the beginning of the so-called "special operation of the Russian troops", this crisis was exacerbated because of the "illegal Western sanctions against the Russian Federation", the Russian foreign minister pointed out.

Lavrov welcomed the agreement from Istanbul, but not because it will open Ukrainian ports on the Black Sea, but because it will force Western countries to remove obstacles to the export of Russian grain.

Meanwhile, Russia admitted it was behind the missile attack on the Odessa port after accusations from Ukraine and the West that it was jeopardizing a deal reached to export Ukrainian grain. A spokesman for the Russian Ministry of Defense announced that military infrastructure was destroyed in the strike.

Ukraine is preparing to celebrate its national holiday on July 28 for the first time. President Volodymyr Zelensky said that his country will celebrate, despite everything, because, in his words, Ukrainians will not be broken.

"After all that our people have experienced, after all that we have learned over the centuries, Ukrainians will never give up their independence," the Ukrainian president said.

Zelensky defined this week as very important for Ukraine

Over the weekend, the Russian army attacked Ukrainian positions in the north, south and east. According to military experts, the Russians are preparing for a large-scale attack in the Bakhmut region, in the Donbas. According to the Ukrainian side, the counteroffensive in the Kherson region continues. In his midnight message, President Volodymyr Zelensky said that an important week begins, in which on July 28, the Day of Ukrainian Statehood will be celebrated for the first time.

"This week there will be important visits of our partners, important negotiations, but most importantly - Ukrainian positions will strengthen and there will be progress. On the front, in the field of diplomacy, in the economy. I am grateful to everyone who protects our country!”, said Volodymyr Zelensky, President of Ukraine.

According to the publication, fighters from the Special Boat Service (SBS) traveled to Ukraine to prepare their Ukrainian counterparts for the Snake Island mission and, more specifically, to train them to work with the special equipment that is in service with the British special forces. - underwater scooter DPV (Diver propulsion vehicle), an item of diving equipment, used to increase the distance that divers can cover with greater speed underwater.

"The 73rd Naval Center became the edge of the sword, securing the forces that reached the island," said a British military source. “Very strong guys serve in the Ukrainian special forces, but they lacked our training and our special equipment. Britain's involvement in training the Ukrainian military was the capture of Snake Island.”

The newspaper reports that British special forces have been training Ukrainians to deal with underwater vehicles, with the help of which, according to the General Staff of the Armed Forces of Ukraine, combat swimmers from the 73rd Naval Center arrived on Snake Island on July 7, trying to they put the Ukrainian flag there. On the same day, the Russian Defense Ministry reported that a Russian Aerospace Force aircraft then struck the island, killing some of the Ukrainian servicemen.

On June 30, Russian Defense Ministry official Lieutenant General Igor Konashenkov announced that the Russian armed forces had withdrawn their garrison from Snake Island "as a sign of goodwill". Since then, the Ukrainian side has ironically commented on each of its military successes on the battle map as an "expression of goodwill" on the part of the Russian army.

Henry Kissinger: Ukraine must not cede any territory to Russia

Former American Secretary of State Henry Kissinger advised Ukraine and the West in future peace negotiations not to cede to Russia any Ukrainian territory occupied since the beginning of the war, DPA reported.

Kissinger told Germany's state-run ZDF television that ceding territory should not be on the negotiating table and called on the West to be clear about what can and cannot be discussed under any circumstances.

“All this must be done in tandem with the people of Ukraine”, the former state secretary emphasized.

Kissinger played a major role in shaping US foreign policy from the late 1960s to the late 1970s, first as national security adviser and then as secretary of state. In 1973, he received the Nobel Peace Prize for the ceasefire and withdrawal agreement with what was then North Vietnam.

Poles collected 4.7 million euros to give Ukraine a Turkish Bayraktar drone, AFP reported, citing the initiator of this idea.

This is Slawomir Sierakowski, creator of a Polish left-wing online publication. He was inspired by Lithuania, where there was also a similar campaign in May. Over 200,000 Poles participated in collecting the money.

The Bayraktar drones, which Ankara is proud of and which Kyiv acquired, went into action in the first hours of the Russian invasion of Ukraine and proved to be a particularly dangerous weapon.