The First US Military Convoy has arrived at the Base near Constanta, Romania 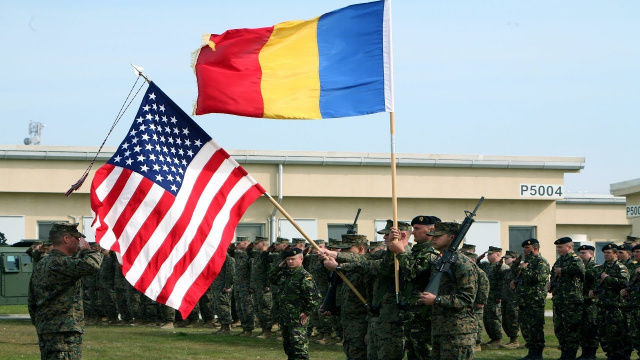 The first US military convoy arrived this morning at around 7.30 a.m. at the Mihail Kogalniceanu military base near the Romanian Black Sea city of Constanta, Digi 24 reports. It consists of about 18 trailers with military equipment.

The second column will depart today from the Romanian-Hungarian border at Nădlac on the same route and is expected to arrive at the base near Constanta tonight. A third convoy arrived in Nădlac during the night. All of them will go to the Mihail Kogalniceanu military base, informs Digi24.

The three convoys, comprising a total of 48 trailers, carry military equipment, including Stryker armored personnel carriers. The US military from the Second Mechanized Regiment of the US Army, which will arrive by plane from Germany, is also expected at the base in Constanta this morning.

Johannes and Stoltenberg will have a face-to-face conversation, followed by formal talks and a meeting with the military stationed at the base. A joint press conference between the Romanian President and the Secretary-General of NATO is scheduled for 12:15 p.m.

US President Joe Biden has announced he will send 1,000 troops to Romania and Poland to strengthen NATO's eastern flank. The United States expects Russia to invade Ukraine.

About 1,000 US troops will join US forces in Romania. The military unit, which is an infantry battalion and will be called Task Force (TF) Cougar, will be under the operational command of the US Fifth Corps, according to a press release sent to Agence France-Presse.

The main mission of TF Cougar during their stay in Romania “will be to conduct training and joint activities with the structures of the Romanian army in order to increase the level of interoperability and mutual trust”.

“The deployment of this unit is part of measures to strengthen Allied positions on the entire eastern flank of NATO as a defensive formula for ensuring Allied security and deterring aggressive action in the Black Sea region. At the same time, it is solid evidence of a high level of cooperation in the field of security and defense in the framework of the Strategic Partnership between Romania and the United States and sends a strong message of solidarity between the allies,” the Romanian Ministry of Defense said in a press release quoted by AFP.

Romanian President Klaus Johannes visited the South-West Multinational Brigade in Craiova yesterday. The President said that the current developments in the field of security in “our immediate neighborhood” prove once again that the measures taken by NATO are necessary, and Romania, in turn, is determined to fulfill the commitments made within the Alliance.

The commander-in-chief of NATO's Allied forces in Europe, General Tod Wolters, and Romania's chief of defense, General Daniel Petrescu, met yesterday at the Mihail Kogalniceanu military base, Romanian media reported. The two discussed the security situation in the Black Sea region and measures to deter and strengthen NATO's defensive positions in the area. General Petrescu said that the Romanian military continues to adapt its training together with its American counterparts, and General Wolters said: “We are here at the invitation of Romania to strengthen the overall response capacity and to maintain the balance of power in the region.”